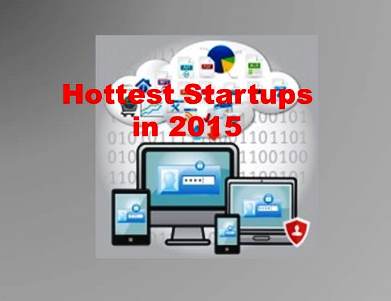 Techrepublic has published recently a list of the hottest startups in 2015.  The startups relating to information services, social media, internet of things or fintech are outlined in red.

Every year a host of new startups enter the market, and existing young companies continue to grow. In the race to gain market share, or disrupt an industry, certain startups break away from the pack, occupying headlines and conversations.  Whether they were born this year, raised a ton of money this year, or simply spread like wildfire in terms of new users over the past 12 months, it’s important to recognize the impact of these companies.  Here’s a look back at the most interesting startups of 2015.

Perhaps the most talked-about, and one of the fastest growing startups is enterprise messaging platform Slack. The tool is oft-lauded as the one app that will kill off email for good. It was initially released in August 2013 and, after raising hundreds of millions of dollars, it was given a valuation close to $3 billion earlier this year. All of that was accomplished with little to no marketing.

Live-streaming app Periscope was acquired by Twitter before it even launched, back in March 2015. Within the first 10 days, the service logged about one million users, and it quickly grew past competitor Meerkat. Despite its recent wane in popularity, it was stilled named Apple’s “App of the year” in early December.

Many startups have come along to try and challenge Amazon’s reign as the general retailer of the internet, but Jet has often been mentioned as the one that might have a chance. With a low membership fee and promises of low prices, the company netted more than $1 million in sales on their launch day. Jet also cut its membership fee to drive traffic, but it’s unclear if that will remain permanent.

Payment-processing startup Dwolla launched back in 2010, but it experienced some nice growth in 2015. The company has raised close to $33 million, with the last funding round occurring in late 2014. However, the company got its first big bank partner in 2015, and made the move to drop transaction fees on lower transfers, signaling a push to bigger markets.

Despite the growth in ride-sharing apps, there is still a need for startups targeting personal vehicles. Luxe, which offers on-demand parking and valet services, raised more than $25 million after only being in business for a few months. Right now, it’s available in nine major cities across the US.

PillPack uses robotics and machine learning to package prescription pills by the date and time they need to be taken. Using an online storefront, and shipping pills to customers, they’re trying to improve the pharmacy experience. The company recently closed a $50 million round in the summer of 2015.

The latest social media sensation is Yik Yak, a pseudo-anonymous platform that provides a feed of local news and gossip. The company has raised $73.5 million since its 2013 debut. However, the app has also been the center of controversy around anonymous bullying and threats.

SIGFOX is a French startup building out a global Internet of Things (IoT) network. While it isn’t a direct challenger to existing network providers, it is carving out a unique niche as IoT continues to grow. In 2015, the company raised $115 million, with investments from some major corporations as well.

Often billed as the Tesla of scooters, Gogoro’s big value comes with its battery-swapping system. The Taiwan-based company has been around for a little while, but its final design was revealed at the 2015 CES show in Las Vegas. Since its founding in 2011, the company has raised $180 million.

Startup 21 Inc developed an embeddable bitcoin mining chip that works with any device connected to the internet. The company launched in May, 2013, but hit it big in March, 2015 when it landed a $116 million investment.