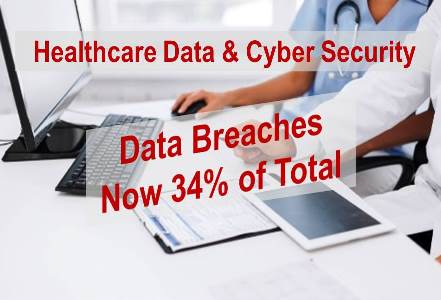 While the business sector led the way in reported data breaches for 2016, healthcare came in second by accounting for 34.5 percent of overall reported breaches, according to research from the Identity Theft Resource Center (ITRC) and CyberScout.

As healthcare IT continues to evolve, the executive suite is also expanding and becoming more intricate. Individuals in leadership positions need to keep data privacy and security issues top priorities, especially as healthcare remains a target for cyber criminals.

The business industry had a total of 494 reported data breaches, while there were 377 reported healthcare data breaches. Education came in third with 98 incidents, while the government/military had 72 reported breaches.

One of the leading causes for healthcare data breaches was employee error or negligence, with 43 reported incidents that exposed 1,183,893 records. In comparison, the second leading sector for employee negligence was the government/military, which had 14 breaches and exposed 35,800 records.

Subcontractors, third parties, and business associates were also a top factor for healthcare data breaches, the report found. The medical/healthcare industry had 16 breaches due to a subcontractor or third party, but approximately 4 million records were exposed. The government/military had the second highest amount of records affected with 95,463.

“For businesses of all sizes, data breaches hit close to home, thanks to a significant rise in CEO spear phishing and ransomware attacks,” CyberScout CEO and Vice Chair of IRTC’s Board of Directors Matt Cullina said in a statement. “With the click of a mouse by a naïve employee, companies lose control over their customer, employee and business data. In an age of an unprecedented threat, business leaders need to mitigate risk by developing C-suite strategies and plans for data breach prevention, protection and resolution.”

Healthcare data breaches also exposed the most Social Security numbers, with 10.4 million records put at potential risk. There were 123 breaches that may have exposed SSNs, the report found, accounting for 11.3 percent of reported breaches.

SSN exposure was a leading concern for all industries, with 52 percent of the overall number of breaches in 2016 potentially

putting SSNs at risk. This was an 8.2 percent increase from the number of exposed SSNs in 2015. Researchers noted that this increase aligns with the increase of CEO spear phishing attacks.