Moody’s Investors Service (MIS) Third Quarter Revenue Up 12%.  Revenue for MIS in the third quarter of 2021 was $925 million, up 12% from the prior-year period. The impact of foreign currency translation was negligible.

Corporate finance revenue was $488 million, up 6%. This was driven by a surge in U.S. leveraged loans for both M&A transactions and increased refinancing activity, partially offset by a decline in global investment grade and high yield bond issuance compared to a strong prior-year period.

Financial institutions revenue was $153 million, up 14%, as bank and insurance issuers opportunistically secured low-cost funding given the attractive rate and spread environment.

Public, project and infrastructure finance revenue was $130 million, down 2%, due to lower supply from U.S. public finance issuers as their immediate financing needs had been largely addressed in prior periods.

Revenue for MA in the third quarter of 2021 was $601 million, up 13% from the prior-year period. Recurring revenue grew 18% and comprised 94% of total MA revenue, up from 90%. Organic MA revenue was $573 million, up 8%, and excluded the impact of acquisitions completed in the prior twelve months. Foreign currency translation favorably impacted total MA revenue by 1%.

Research, Data and Analytics (RD&A) revenue was $445 million, up 15%. This increase was driven by continued new business demand for KYC and compliance solutions, as well as data feeds, and was further supported by strong renewal yields for our credit research products. Organic RD&A revenue was $431 million, up 12%, and excluded revenue from the acquisitions of Acquire Media, Catylist and Cortera.

Enterprise Risk Solutions (ERS) revenue was $156 million, up 8%. Organic ERS recurring revenue grew 13%, driven by our banking and insurance solutions, while ERS transaction revenue declined due to an expected decrease in one-time sales as the strategic focus remains on recurring revenue. As a result, organic ERS revenue, which excluded revenue from the acquisitions of ZM Financial Systems and RMS, was $142 million, down 2%. 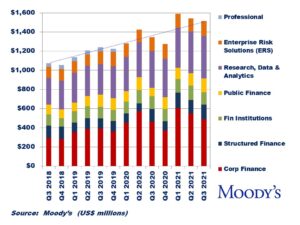 Third quarter 2021 operating expenses for Moody’s Corporation totaled $850 million, up 19% from the prior-year period. Approximately fifteen percentage points of this increase were attributable to operational and transaction-related costs associated with recent acquisitions, including RMS, as well as higher incentive and stock-based compensation accruals and a $16 million charitable contribution via The Moody’s Foundation. Organic strategic investments, as well as hiring and annual salary increases further elevated expenses by 7 percentage points, but were partially offset by ongoing efficiency initiatives. Foreign currency translation unfavorably impacted operating expenses by 1%.