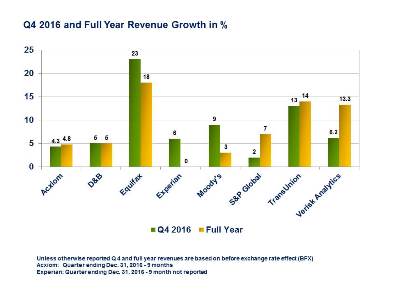 It is the annual report season and BIIA has captured below the segment results of some of the most prominent information providers who had released their earnings up to February 25, 2017.  BIIA publishes company results on a regular basis, complete with charts, however the reports are password protected.  We are offering this review as an encouragement for our readers to obtain a password (provided their companies are members). Connectivity:   Revenue, which includes the Arbor and Circulate acquisitions, was $39 million, up 36% compared to the third quarter of last year.  LiveRamp™ product revenue grew 61% year-over-year.

Global Consumer Solutions revenue was $98.9 million, an 18 percent increase from the fourth quarter of 2015 and up 20 percent on a local currency basis.

Market and Commodities Intelligence 4th Quarter, 2016:  Revenue decreased 11% to $595 million in the fourth quarter of 2016 due to the sale of J.D. Power, the SPSE/CMA pricing businesses, and Equity and Fund Research.  Excluding revenue from these divestitures, organic revenue growth was 8%.

S&P Dow Jones Indices LLC 4th Quarter, 2016:  Revenue increased 13% to $171 million in the fourth quarter of 2016.  Revenue increased primarily due to AUM growth in ETFs, data subscriptions, and derivatives trading activity.  Average AUM in exchange-traded funds based on S&P DJI’s indices was $954 billion in the quarter, an increase of 19% versus the fourth quarter of 2015.  By year-end, AUM surpassed $1 trillion, marking a new milestone for the business.