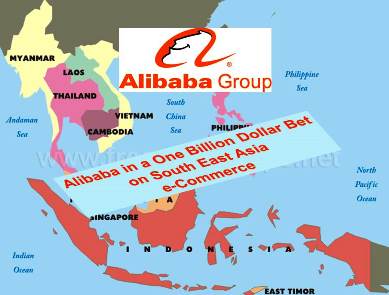 Alibaba Group has agreed to buy a controlling stake in Southeast Asian online retailer Lazada Group for about $1 billion.

Lazada, founded by Germany’s Rocket Internet in 2012, is headquartered in Singapore and also operates in Malaysia, Indonesia, the Philippines, Thailand and Vietnam. Lazada saw revenue jump 81 percent to $190.0 million in the first nine months of 2015, while active customers more than tripled to 7.3 million. However, its adjusted loss before interest, tax, depreciation and amortization more than doubled to $212.9 million. Rocket reports 2015 figures on Thursday.

Rocket Internet is known for funding and ultimately selling start-ups that follow the model of successful existing businesses.  When Lazada first emerged, it was pegged as a Southeast Asian version of Amazon.com Inc.  However Lazada was running out of cash. The sale of Lazada is fortuitous for the Samwer brothers (Alexander, Marc, and Oliver). In Alibaba, they found a buyer with deep pockets, and extensive e-commerce expertise in emerging Asia.   In essence the deal also helps out Rocket Internet, which would have spelled trouble if Lazada would have gone under.

Under the deal announced on Tuesday – Alibaba’s biggest overseas investment so far, according to Thomson Reuters data – the firm will buy about $500 million of newly issued Lazada shares. The rest will be bought from current shareholders.

Source: Reuters and other press commentary