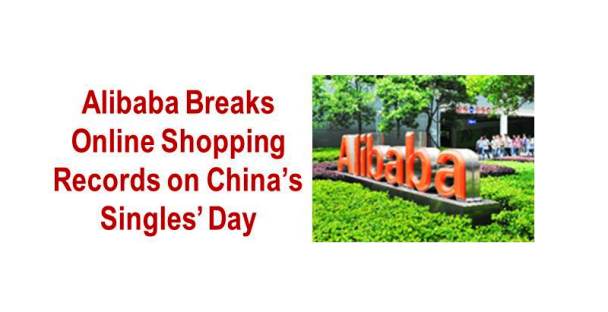 As of Tuesday afternoon online sales for China’s biggest e-commerce company punched through last year’s Rmb36.2bn and generated 165m orders, according to data displayed on a massive screen in Alibaba’s central auditorium.

Alibaba has turned the day, created by college students in 1993, into a festival of conspicuous consumption that has surpassed shopping records elsewhere in the world. Last year’s $5.8bn was more than 2.5 times the goods sold on Cyber Monday, the US online shopping bonanza on the first Monday after Thanksgiving.

At Alibaba’s headquarters in Hangzhou, China, the air was festive. Against the backdrop of a digital billboard of shopping totals spiralling upwards at a dizzying rate.   Zhang Fei, a vice-president in Alibaba’s IT department, told the visitors to the auditorium that Alipay, Alibaba’s PayPal-like payments service, handled 38,000 transactions per second at the peak, which he said was a world record.

The day also highlighted Alibaba’s conversion to mobile shopping. As of 2pm, 44 per cent of the gross merchandise value – or total cost of goods sold – had come via sales made on smartphones, higher than the annual average.

Shoppers came from further afield too. “This is the first year we want to change Singles’ Day from a China consumers’ day to a global consumers’ day,” said Daniel Zhang, chief operating officer. However, he added, “numbers could be quite small because we are in the beginning stage”.  Mr Zhang said 35,000 merchants were participating in the sales both in China and abroad.

Last year e-commerce accounted for 8 per cent of China’s total retail sales, according to official statistics. Alibaba says its consumer websites, which host third-party vendors, accounted for 80 per cent of total Chinese ecommerce.

Mr Zhang said the massive scale of the shopping day illustrates the flexibility of Alibaba’s business model. Last year Singles’ Day generated 156m packages compared with a daily average of 16m, stretching the dozens of private logistics companies working with Alibaba sellers to their limit. “This cannot be done by one company alone,” said Mr Zhang. “This can only be done by an ecosystem.”

Alibaba said that by noon on Tuesday 12 brands had exceeded sales of Rmb100m on the day, led by smartphone seller Xiaomi, which had raked in more than Rmb1bn via its Xiaomi Tmall store, according to Alibaba figures.