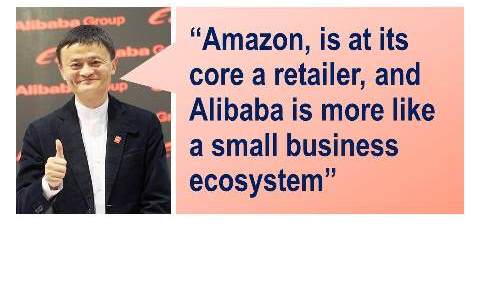 In its latest effort to keep up with its American big brother Amazon, Alibaba has announced the debut of its own smart home speaker.

With this addition, each of the Frightful Five will have its own voice-controlled speaker:  Amazon with its Echo family of devices; Google with the Home speaker; Apple with its new HomePod; Microsoft with the Cortana-powered Invoke speaker; and now, Alibaba, with its as-yet unnamed voice assistant and device.  Like Amazon’s Echo, Alibaba’s smart speaker will be able to carry out verbal commands and enable users to purchase products from Alibaba’s shopping platforms Taobao and Tmall – all, of course, in Mandarin.

But Alibaba founder Jack Ma is always careful to differentiate the two eCommerce giants.  Alibaba isn’t just a copycat. It’s not just the “Amazon of China.” Amazon, says Ma, is at its core a retailer, and Alibaba is more like a small business ecosystem.

“Amazon is more like an empire — everything they control themselves, buy and sell,”  Ma told CNBC. “Our philosophy is to empower others to sell, empower others to service, making sure the other people are more powerful than us. With our technology, our innovation, our partners — 10 million small business sellers — they can compete with Microsoft and IBM.  Our philosophy is, using Internet technology we can make every company become Amazon.”

Still, it’s hard not to liken the two based on function as well as sheer size. They don’t just compete in terms of shopping.  They also offer movies, cloud and grocery services – and now, artificial intelligence.