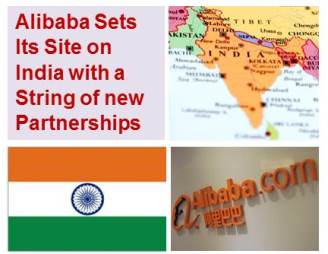 Amid talk of Alibaba’s foray into the consumer-facing e-commerce space in India, Alibaba has gone ahead and struck a string of partnerships to prop up its existing business-to-business marketplace venture here in India. TOI has learnt that Alibaba is partnering with DHL and Delhivery for providing domestic and international logistics support to Indian sellers, along with offering financial aid through its tie-ups with Aditya Birla Group‘s NBFC arm, IDFC Bank and Kotak Mahindra Bank. An online B2B commerce platform caters to small-and medium-sized enterprises (SMEs) which usually buy and sell products in bulk. The Hangzhou-based Alibaba group’s massive success has been attributed to its robust seller ecosystem, having begun life as an online B2B commerce company which connected local Chinese manufacturers with overseas buyers.

Vinay Bhartia, senior VP at Alibaba, is spearheading the B2B platform for the Chinese firm based in Mumbai, and is learnt to be working along with Guru Gowrappan, global MD at the Chinese ecommerce major. TOI has learnt that Alibaba has been bulking up its team in India by hiring executives to push growth in this business.  Some of the local players in this space include India MART and scores of startups including Moglix, mSupply.com and Ofbusiness, besides Amazon Business, which has a small presence here. In the first phase, Alibaba is looking to tap SMEs focused on exports, a source said.  Bhushan Patil, who was one of the key executives heading the B2B marketplace business for Alibaba in India, left earlier this year to join Paytm, in which the Chinese internet conglomerate holds a 40% stake. There’s been chatter around Alibaba’s entry into the consumer e-commerce market through an acquisition, which will pit it against Amazon, Flipkart and Snapdeal, where it’s a small shareholder.

When contacted by TOI, an Alibaba spokesperson confirmed the partnerships. “Their B2B platform has been around for years but they haven’t been able to make much progress scaling it. Now it seems they are seriously looking to focus on the B2B side by helping sellers with working capital and logistics.They’ll also bring in Chinese vendors onto the site as they have great depth in the merchant ecosystem back home,” a person privy to the developments said.  IDFC Bank has come on board as the main partner to provide cross-border banking services to sellers and offer to them banking solutions. While IDFC Bank and Kotak Mahindra Bank will be lending to these sellers, majority of the working capital support for merchants will be routed through Aditya Birla Finance.

Alibaba.com India E Commerce , the entity which runs the B2B marketplace business in India has been registering profits for the last three years though it’s sales have slipped starting last year. In financial year 2015, it reported a profit of Rs 1.3 crore as per filings made to the Registrar of Companies. This number was almost the same a year ago. Revenues also fell to Rs 18 crore from about Rs 21 crore a year ago. Alibaba has been operating in India since 2007 and the online retailer claims its marketplace had 4.46 million registered Indian buyers and sellers at end of 2014.