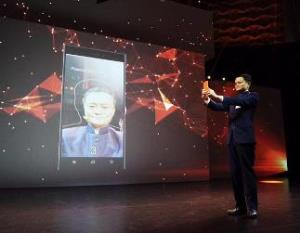 Alibaba CEO Jack Ma has been showing off a technology that uses facial recognition to allow you to make payments with a selfie taken with your smartphone.  It’s currently being tested by Ant Financial, an Alibaba affiliate that runs the Alipay payment service.  Mr. Ma unveiled the system at the CeBit conference in Hanover, Germany just as he was about to finish his speech.  He demonstrated the new system by buying a gift for the mayor of Hanover live on stage.  He bought a vintage souvenir stamp from Hannover 1948, which, naturally, was sourced from Alibaba.

The charismatic CEO simply pushed a “Buy” button on an app he called “Smile to Pay,” took a picture of himself and then announced that the stamp would be delivered to the mayor’s office in six days.  Ma did not go into detail, and there is no official launch date for “Smile to Pay,” but a company spokeswoman told the South China Morning Post that the company was “quite serious” about launching the product.

Alibaba is already a big player in the mobile payments market. Alipay, which works much like PayPal, has more than 300 million registered users, handles roughly 80 million transactions daily and is the dominant force in the Chinese market. Alipay spun out of its parent company after Alibaba’s IPO in New York last year, and Ma has already hinted that he will create a separate public offering for the payment company.

It’s unclear how far away from market this technology, and Alibaba probably isn’t the only one working on this. We will no doubt see similar apps from Google and Apple over the next few years.

The arrival of Apple Pay and NFC on the iPhone 6 means that 2015 is likely to be the year that mobile payments really explode.  Already, millions use services like Google Wallet, Paypal and Venmo to make purchases on their phones, but Alibaba is taking things up a notch with a new “Pay-By-Selfie” technology.