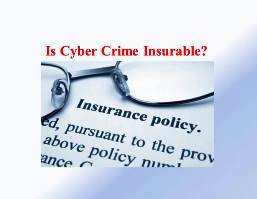 The frequency of cyber war and terrorism is no longer the risk. The magnitude of the potential damages is the real threat.  Can one obtain  insurance?

It’s conceivable that an enemy of the US government could hack a US energy, water, or fuel distribution system causing loss of life, severe physical damage to property, or insurmountable financial damage to a non-government business.  In 2007, the Department of Homeland Security conducted the “Aurora Generator Test” involving the turbine of an electricity generator that burst into smoke in the Idaho National Laboratory, ultimately causing failure of the device.  Engineers determined that by simply changing the operating cycle of a power generator remotely via computer, the turbines could set fire, eventually destroying the machine. For a public or private company, the concern is whether a cyberattack on the U.S. government causing ancillary damage is insurable under a cyber liability insurance policy. The answer is not black and white.

At a cybersecurity insurance workshop hosted by the Department of Homeland Security’s National Protection and Programs Directorate, the majority of attendees believed that “catastrophic” cyber risks that the federal government should be responsible for are currently uninsurable. Before denying coverage under a terrorism and war exclusion, carriers must evaluate, among other things, whether: 1) it’s clear that an act of terrorism or war has occurred, and 2) a more specific exclusion addressing cyber terrorism or war is included in the policy. Yes, the United States is able to pinpoint the origination of a cyberattack by a foreign enemy, but will cyber liability insurance cover the risk of loss?

This issue has no simple conclusion given the increased frequency and severity of cyberattacks. Courts are faced with the challenge of interpreting whether a war and a terrorism exclusion limits coverage under a cyber liability policy when a foreign enemy attacks the US government, causing damage to a public or private company. If a company has a cyber liability policy, the prudent course of action is to negotiate the inclusion of cyber war and terrorism coverage to avoid the risk of loss from the secondary physical or financial damage to a public or private company caused by a war or terrorist act on the US government.   jd supra