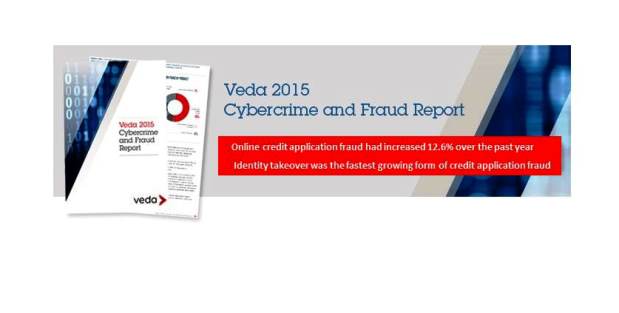 Imelda Newton, General Manager, Veda Fraud & Identity Solutions said that with online fraud now accounting for half of all fraudulent credit applications,  a tipping point had been reached in the threat of cybercrime to the Australian financial services sector.

“As the delivery of financial services online grows, so does the proportion of fraud occurring online,” Ms Newton said. “As credit providers toughen up rules and technology for the verification of identity, providing a false identity has become less viable for fraudsters. “Instead, identity takeover, where the bona fide identity of an individual or entity is stolen and operated for the purpose of applying for credit, is becoming more attractive for criminals.  This type of fraud has grown 59% in the past two years. “While online fraud continues to grow, the broker channel is also being increasingly targeted by fraudsters.  Fraudulent applications for credit via the broker channel grew 24% from 2013/14 to 2014/15 and now represents 21% of all credit application fraud.

“The Australian Government estimates identity crime and misuse costs Australia $2 billion a year with a further $350 million a year spent on preventing and responding to identity crime. “The cost of brand damage to an institution that suffers a major data breach, or the cost of the embarrassment felt by a consumer if they are refused credit because their identity has been stolen, is immeasurable,” Ms Newton said.

The Veda 2015 Cybercrime and Fraud Report identifies 10 cybercrime challenges and threats for 2016.

Among these threats, Veda believes the health sector and retail sector will be a major target for cybercriminals due to a perceived lack of security, previous successful hacks and the wealth of information available.  “The Internet of Things (phones, vehicles, wearables and so forth) is becoming more inter-connected.  Data is being recorded on a previously unseen scale and creates new risks for consumers and the vendors of these technologies as cyber criminals seek new opportunities to steal,” Ms Newton said.