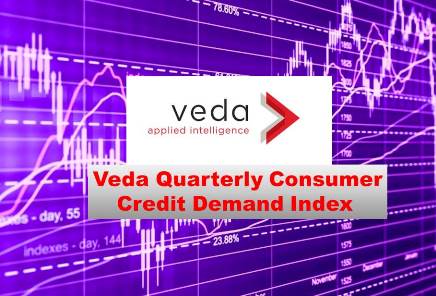 Released recently, the Veda Quarterly Consumer Credit Demand Index, measuring the volume of credit card and personal loan applications, showed a 9.7% lift in consumer credit demand in the December quarter compared with the same period in 2014.

Angus Luffman, Veda’s General Manager of Consumer Risk, said the growth in demand for personal loans, building on positive results from the previous quarter, could be attributed to several factors.

“Despite the challenges posed by the downturn in mining-related construction, retail spending has remained robust due to low interest rates settings, a strengthening jobs market and rising consumer sentiment late last year.

“Auto finance applications, in particular, have experienced an upswing, with car sales rising by 6.0% over the year to November 2015, helping drive the growth in personal loan applications,” Mr Luffman said.

“Another trend carrying through from the previous quarter is the proportion of new personal loan applications coming from alternative lenders.

“Interestingly, the quality of applicants approaching non-traditional finance providers has been steadily improving over the past two years, as evidenced by the increase in applicants’ average credit scores, or VedaScores. The average age of borrowers using alternative lenders is creeping up as these lenders shift from being primarily a channel for younger consumers. The age of applicants is now on par with the market average.

“It’s still early but, if this trend continues, it may be an indication that alternative lenders are becoming a more mainstream option for borrowers,” Mr Luffman added.

“The fall in mortgage applications suggests cooling conditions in the housing market heading into 2016, especially in light of the Australian Prudential Regulation Authority’s (APRA’s) changes to investment lending. It also suggests less support for retail spending from the housing market in the months ahead,” Mr Luffman said.

Strong growth in household goods retailing late last year and improving growth in car sales are both consistent with the stronger growth being seen in personal loan applications.

The slowing demand for mortgages is consistent with other recent indications of cooling in the housing market, including falling auction clearance rates and a fall in house prices in November and December. The index has been trending to support a softer housing market after the most recent mortgage demand peak in June 2015. The latest data suggests more subdued housing market conditions heading into 2016.