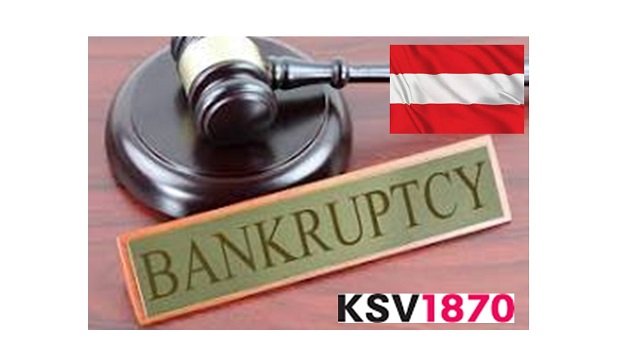 So far this year, 13 company bankruptcies have been counted per day. In addition, the estimated liabilities have increased by almost 90 percent. 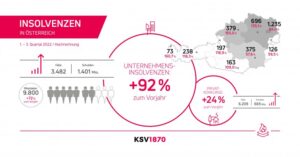 According to the current KSV1870 projection, 3,482 companies (+ 92% compared to 2021) were affected by insolvency in Austria in the first nine months of 2022 – this corresponds to around 13 company bankruptcies per day. The plus is most evident in Upper Austria and Vorarlberg. Most insolvencies are recorded in the “trade & maintenance/repair of motor vehicles”, the construction industry and the catering industry. At the same time, the estimated liabilities* have increased by around 88 percent to EUR 1.4 billion. Furthermore, the number of employees affected has increased to 9,800 people (+ 72%). The number of creditors, on the other hand, fell by four percent to 20,300 victims.

Inflation and cost explosions put a massive strain on households and keep the courts running.

According to the latest KSV1870 projection, 6,209 debt settlement procedures were opened in Austria in the first nine months of the year. This corresponds to an increase of almost 24 percent compared to the previous year. At the same time, an average of 23 cases per day are opened in the domestic courts. Furthermore, the provisional liabilities* also increased by a little more than 16 percent – ​​to EUR 665 million. This means that in 2022 private individuals have so far filed for bankruptcy with average debts of EUR 107,000.

“In private bankruptcy, the current increase is mainly due to the insolvency amendment of the previous year, which brought significant simplifications, such as a shorter debt relief period for debtors.

But if you look a little into the future, the exploding costs will also have an impact on almost all situations in life,” explains MMag. Karl-Heinz Götze, MBA, head of KSV1870 insolvency.