B20 Calling for International Cooperation to Shape an Interconnected World 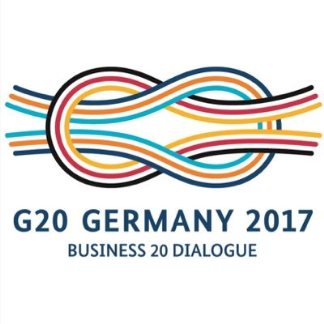 Resilience, Responsibility, Responsiveness – Towards a Future-oriented, Sustainable World Economy  –  This is a strong and convincing message which was sent by the B20 business community to the G20 leaders.

Through trade, investment, financial integration, data flows, and migration, our economies are growing more and more interdependent. This interdependence is a driver of economic growth and prosperity for all.

While the stability and resilience of financial markets have greatly improved since the recent financial and economic crisis, global economic growth remains subdued. Many countries are still struggling with high unemployment rates – especially among young people – and socioeconomic inequalities. There has been a worrisome increase in protectionist measures worldwide, dampening growth and productivity outlooks. Rarely any period before has called for stronger international cooperation and global governance as 2017. To address geopolitical conflicts, climate change, terrorism and a mounting questioning of the international order, the G20 and a strong social partnership – advanced by the cooperation of B20 and L20 – are indispensable.

We, the global business community, are strongly convinced that globalization is beneficial.  However, common rules, strong institutions, and international cooperation are necessary to shape the outcomes of globalization and ensure that everyone has the chance to benefit from its opportunities. In our inter-connected world, international cooperation is key – to realize the benefits but also to tackle the challenges. We therefore call upon the G20 to take decisive actions at the G20 Summit in Hamburg and to overcome the differences, which have riddled the G20 over the past months. The G20 has made good progress regarding many topics. However, there are two areas we call upon the G20 to pay particular attention to at the Hamburg Summit.

Trade promotes prosperity worldwide. Between 1990 and 2014, world trade increased about fivefold and global per capita income grew by a factor of 2.5. This had a very real and positive effect on people’s lives: Hundreds of millions of people have been lifted out of poverty and have seen their living standards and incomes improve. Trade fosters a resilient, responsible, and responsive global economy by boosting growth, employment, welfare, purchasing power, and productivity. Both exports and imports enhance economies of scale, specialization, and competition, while lowering input prices. This is especially beneficial for lower-income households. Despite the overall benefits of trade flows, not everybody has benefitted sufficiently from globalization. This not only calls for better communication on both the benefits of globalization and the drawbacks it entails – but governments and businesses also need to ensure that the positive effects of trade benefit the entire economy in order to achieve a social balance and societal cohesion. The G20 needs to redouble its efforts to improve education and lifelong learning to help people seize new opportunities in a changing world. This is even more important in the light of structural change due to Digitization.  Social protection systems, which ensure a safety net for people who have lost employment, active labor markets, and adjustment assistance policies that support people getting back to work, and a strong social partnership can help to make economic growth more inclusive.

We also call upon the G20 members to jointly restate their commitment to open and rules-based trade. We would like the G20 to take concrete actions to strengthen the implementation of the protectionism standstill and rollback. G20 members should further reinforce their commitment to the multilateral trading system. The World Trade Organization (WTO) is the premier guardian of a global level playing field and fair competition. Today, it is more imperative than ever to strengthen the WTO, its rules, its monitoring instruments, and its dispute settlement mechanism. The WTO Ministerial Conference in Buenos Aires in December 2017 (MC 11) is an opportunity to lay the groundwork for a future-oriented multilateral trade agenda. The B20 supports the goals of the Doha Round and asks G20 members to strive for an ambitious and rapid conclusion of the remaining topics. Furthermore, G20 members need to actively support the implementation of the Trade Facilitation Agreement (TFA). It is imperative that the G20 pushes for a forward-looking agenda. Digital trade holds huge potential. It lowers transaction costs and scale requirements while giving easy access to a global marketplace, particularly for developing countries. However, substantial barriers prevent the potential benefits of digital trade from being fully realized. We therefore would like to see a significant increase in concrete actions enabling digital trade, including advancing the dialogue on rules both in regional agreements as well as the WTO.

Economic growth is indispensable in fulfilling the 2030 Agenda and the Sustainable Development Goals (SDGs). At the same time, the stress on ecosystems and natural resources is undeniable. Climate change represents one of the largest risks to sustainable development, inclusiveness, equitable economic growth, and financial stability. With the SDGs and the Paris Climate Agreement, governments have committed to taking decisive action towards sustainable development and against global warming.

The B20 is committed to contributing to a future-oriented, sustainable, and competitive world economy by finding innovative solutions, which foster the energy transition, reduce CO2 emissions, and decrease the resource intensity of the world economy. However, to provide the necessary business solutions, companies need a predictable and stable policy environment that is market-oriented, cost-effective, and strengthens competition among technologies. While business commends the G20 efforts in the areas of energy efficiency, renewables, and partly also with regard to energy access, the G20 has not yet come up with predictable market-based policies on climate change.

We, the international business community, believe in the importance of the Paris Climate Agreement to limit the increase of global temperatures, to strengthen the ability of developing countries to cope with the impacts of climate change and to shift investments in those directions. The Paris Climate Agreement provides a solid basis to change how we produce and consume energy in all parts of our societies, leaving room to ensure competitiveness, sustainable growth, energy access, and job creation in line with the SDGs. Investing in a sustainable future does not come at the expense of economic growth and job creation. Quite the contrary, investing in modern, smart, and clean economies can boost economic development, create jobs, improve productivity, and reduce inequalities.

Many countries have shown determination to implement the Paris Climate Agreement, and we urge the G20 members to commit to the Agreement at the Summit in Hamburg. G20 members should support the United Nations Framework Convention on Climate Change (UNFCCC) in developing an effective Paris rulebook and submit (revised) Nationally Determined Contributions (NDCs) with high and comparable ambition levels that are sufficient to reach the climate goals set forth in the Paris Climate Agreement. Leading by example, the G20 members should commit to back up their NDCs with concrete and transparent national low-greenhouse gas emission development strategies by 2018, but definitely not later than 2020. Those with respective commitments should speed up their efforts to mobilize $100 billion a year by 2020 in climate finance to support climate action in developing countries. Second, the G20 should collectively drive towards effective and globally converging carbon pricing mechanisms. Furthermore, the G20 should enable financial markets to deliver on sustainable development and further expand the work of the G20 Green Finance Study Group under the finance track to that end.

The B20 strongly believes: If the G20 did not exist today, we would need to create it. It holds the necessary weight to govern globalization: Its members are not only responsible for 85 percent of global gross domestic product (GDP) and three quarters of global exports (goods and services), but also represent about two-thirds of the world’s population. That entails obligations. Only together can we build resilience, improve sustainability, and assume responsibility. We want the G20 to take leadership and set the agenda for a future-oriented, inclusive global economy. This is not the time for national solo runs. The G20 must overcome the differences of the last months. It is high time to shape globalization together.

Business20 (B20) is the official G20 dialogue partner for business matters. Its mandate is to support the G20 through consolidated representation of interests, concrete policy proposals, and expertise. Furthermore, the B20 promotes dialogue among policy-makers, civil society, and business at the inter-national level. The B20 is jointly organized by the Federation of German Industries (BDI), the Confederation of German Employers’ Associations (BDA), and the Association of German Chambers of Commerce and Industry (DIHK). The B20 has developed recommendations to the G20 on Trade and In-vestment as well as Energy, Climate and Resource Efficiency.

BIIA has been a steadfast supporter of B20 activities and participated in the SME Taskforce, the Digitization Taskforce and the SME Cross Thematic Group as reported previously.