Bank Data Breaches Are Up and It’s An Inside Job 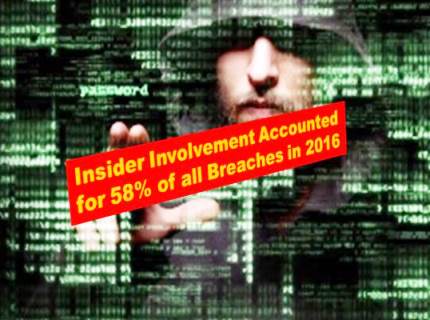 There have been many high-profile bank breaches in the news of late, and much of the blame has been laid on these institutions’ legacy operating systems, and their inability to cope with new forms of cyber-attacks, including breaches.

However, a bigger security flaw may in fact come from another source.

For example, breaches can be effected by hitting individual workers’ computers with multiple phishing scams to install malware.

Insider involvement accounted for 58% of all breaches in 2016; of these, 53% acted inadvertently, while 5% acted with malicious intent. To limit this damage, banks have to work harder to educate staff about cyber-security, and up their fraud-detection mechanisms.

This suggests that cyber defense has to begin with cultural overhauls, rather than technical ones. That more than half of banks’ breaches are caused by employees highlights the futility of their investing in cutting-edge core systems to bolster security without rigorously educating staff and improving governance first.

Arguably, even the best tools are only as good as the employees using them. The pressure to reform will only continue to increase as the General Data Protection Regulation (GDPR) comes into effect, mandating banks to report all breaches within hours, or face fines and penalties.

Open banking is the democratisation of access to data previously exclusively owned by legacy financial institutions.

The open banking trend is being driven by a number of factors and will ultimately become the norm. That means retail banks need to rethink their business and operational models if they want to maintain the positions of dominance in the financial ecosystem.

Sarah Kocianski, senior research analyst for BI Intelligence has compiled a detailed report on open banking that explores the drivers behind open banking in detail, outlines the options for banks as they look to update their business and operational models, and explains the likely potential winners and losers of open banking.

Here are some of the key takeaways:

In full, the report: