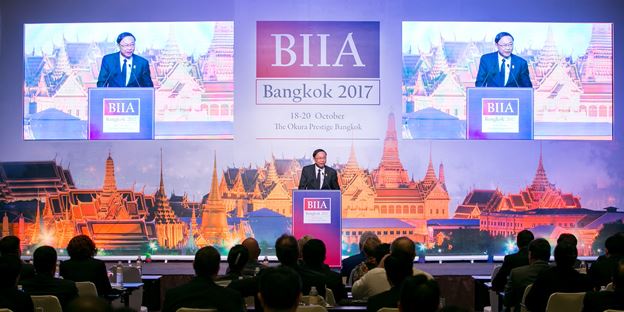 His Excellency Dr. Pichet Durongkaveroj, Minister of Digital Economy and Society gave the opening keynote address at the BIIA 2017 Biennial Conference on Digitization on October 19th, 2017.

In his riveting speech Dr. Pichet emphasized the importance of digitization in economic and social development.  In order to realize the benefits of digitization we need to look far ahead. ” Speed is of essence:  What took three months before has to be done in three weeks or even in three days.  So I have become quite a slave driver these days,”  he commented.  Thailand, like other Asian governments look to the Internet for answers. The mission of his ministry is to digitize and link all government institutions in the interest of transparency and to lower cost of government.  The Thai government is installing broadband throughout Thailand.  There are 75,000 villages.  19,000 have already access to broadband and the rest of the country will have access to broadband by next year.  This will permit not only villages to sell to next village, but the world.  Thailand intends to become a digital hub in the region.

He regarded e-commerce as a key driver to enhance the country’s productivity, especially under the internet-based economy, which widens the opportunity for people to access market places worldwide.   In this conjunction the minister emphasized first the aspect of income, rather than on e-learning.  Providing income for villagers through trade will permit villagers to work in their home towns rather than migrating to metropolitan centers.

This initiative is commendable and surpasses for example that of Germany and the UK, where broadband coverage is low in rural areas, retarding the development of SMEs. Unified Digital Identity planned:  The government plans to set up a national single-point identity platform by mid-2018 in an effort to centralize identity verification, to reduce fraud and improve efficiency of financial and e-commerce activities.  Crucial information such as civil register and credit status will be gathered for verification purposes.  In this conjunction the Ministry of Finance and the Ministry for Digital Economy and Society (DE) was held recently to update the development plan.  The meeting included the representatives of the Bank of Thailand, The National Credit Bureau (NCB), the Stock Exchange of Thailand, the Securities and Exchange Commission and the Ministry of Interior.

National Cyber Security planned: To safeguard against cyber crime the Thai government has formed a National Committee on Cyber Security which is chaired by the Prime Minister.   In this conjunction Thailand is establishing a cyber security agency.

To listen to the entire speech click on this link.