BIIA in Action: BIIA continues to participate in the SME Cross-thematic Group. Recently BIIA joined also the B20 Digitization Taskforce . 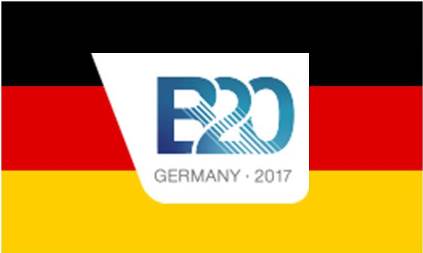 BIIA in Action:  BIIA continues to participate in the SME Cross-thematic Group.  Recently BIIA joined also the B20 Digitization Taskforce .

G20/B20 initiatives play an important role in the assessment of future trend and growth aspiration of countries.  In this conjuncture BIIA participated in the B20 SME development taskforce.  We have covered this activity in a previous post.  In this post is a link to the final report of the SME taskforce.

In October 2016 the chairmanship of the B20 initiatives rotated from China to Germany.   In the 2016/2017 cycle the B20 is setting its sights on Digitization.  BIIA has become a member of the B20 Digitization Taskforce because of the following reasons:

“Digitization is disrupting our economy and day-to-day life”

The topics selected by the task force are relevant for national economies.  Those indicated in blue are of particular importance for the business information industry.

The German Federal Chancellery has mandated the leading German business associations – BDI, BDA and DIHK – to conduct the B20 presidency during the German G20 presidency (B20 Germany). While the German government will assume the G20 presidency from China on 1 December 2016, B20 Germany was launched on 4 September 2016 with the hand-over from B20 China. The three responsible associations (BDI, BDA and DIHK) maintain a B20 Executive Committee, which takes all significant decisions on B20 Germany by consensus. A B20 Secretariat headed by a full-time B20 Sherpa handles operational implementation. There will also be B20 advisory/advocacy bodies, above all a Business Advocacy Caucus composed of CEOs and business organization leaders from the G20 states. The work of the B20 will take place in taskforces and cross-thematic groups.

The latest B20 Newsletter can be downloaded here: b20-newsletter-november-2016