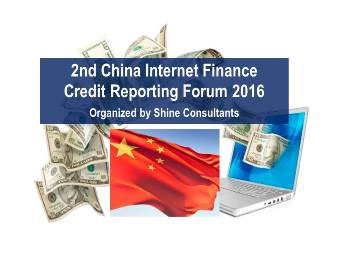 For the second time BIIA was a supporting organization together with sister Credit Trade Associations in Guangdong and Inner Mongolia.  BIIA director Lawrence Yee gave a speech during the opening session of the conference. During the two day event, there were 19 speakers and 2 panels.  The keynote speakers were from the IFC (Huang Lin) and the European Credit Research Institute (Sylvain Bouyon).  Around 200 people attended.  Also there was an award ceremony for five most innovative companies in Internet Finance on Dec 1 with BIIA director Lawrence Yee being the presenter.

The consumer credit opportunity was again the central theme of the forum, with six out of eight PBOC first batch of potential licensees presenting.  Zhima Credit (aka Sesame Credit) of Ant Financial gave a most informative presentation on their data collection methodology and applications.  Tencent Finance promised to be more active next year with ground work on KYC making progress.  Others showed different applications beyond bank loans, commonly known as social credit.  Even though several rounds of inspection have been conducted by PBOC, there is no license yet issued for consumer credit bureaus two years following the announcement.

Other speakers in the consumer space covered the segments big data, anti-fraud, and applications for the travel and car rental industries.

On B2B, China National Credit Information Services gave a most informative presentation of Public Sector Information in China.  The company is linked to Ministry of Commerce.  CRIF with its Taiwan subsidiary CCIS introduced their service to support cross-border e-commerce. Experian presented risk products in internet finance.