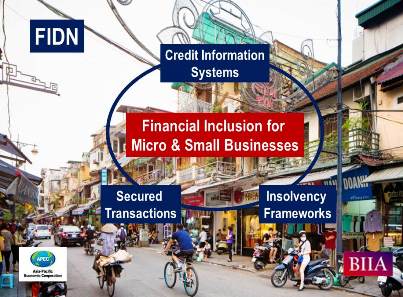 Representing BIIA, Peter Sheerin was recently invited as a global credit reporting expert to attend as a speaker the first (of two) Financial Infrastructure Development Network (FIDN) workshop(s) on March 14-15, 2016 in Manila, Philippines.

The FIDN initiative is an integral part of the 2015 APEC Finance Ministers’ Cebu Action Plan which in part focuses on the key areas on Credit information Systems and Secured Transactions Systems (Movable Asset Lending Reform), together with Insolvency frameworks as it is accepted that these initiatives have the potential to facilitate the wider use of credit information and movable assets as collateral in increasing access to finance to MSMEs.

This conference highlighted the best practices in the reform areas of Credit Reporting and Secured Asset Lending. As a result of this conference, APEC member economies will now have better understanding of the reform process needed to implement these best practices, as they learn of the ongoing reform the Philippine Government is undertaking in Credit Information Systems and Secured Transactions. The lessons learned from the FIDN workshop will also serve well as a platform for the Philippine Government as it was able to hear the key issues on these reforms directly from expert speakers, Government Officials, Philippine SMEs, local lenders and other relevant stakeholders.

The conference was opened by Dr. Julius Caesar Parreñas, Senior Advisor, Nomura and was followed by interesting and informative presentations over the next two days including the Peruvian experience in respect of credit reporting and how E-Money was promoting financial inclusion. Peter’s presentation outlined how SME’s/MSME’s could create a financial footprint and how to overcome the challenges for those vulnerable borrowers to gain access to credit. The presentation was particularly targeted

The second day moved to highlight the importance and challenges of jurisdictions adopting a robust and effective Secured Asset Lending regime.  The conference was attended by in excess of 150 key individuals from Governments, local stakeholders and both local and international experts.