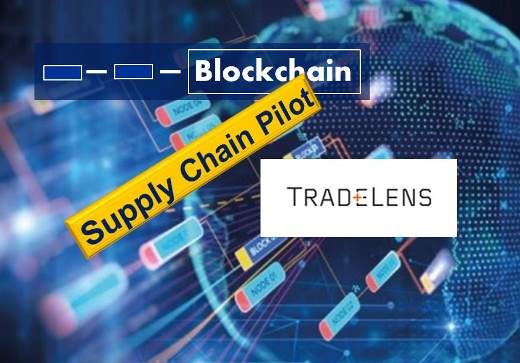 Announced recently IBM and Maersk have signed up 94 firms for the platform since it was spun off from Maersk in January. IBM and Maersk have also finally given it a name: TradeLens.  Leveraging Maersk’s leviathan-like scale, TradeLens has attracted a wide variety of entities, ranging from dozens of port operators and customs authorities to logistics companies and even rival ocean-going carriers, such as Pacific International Lines, all of whom have been testing the platform.

The pilot stage now complete, TradeLens is available for participation through an early adopter program and is expected to be fully commercially available by the end of this year. And to drive home the message that TradeLens is an open and neutral platform, IBM and Maersk have updated their marketing strategy, now describing the project as “joint collaboration” rather than a joint venture.
“At the time of the launch, we wanted to be clear that we were not offering a bespoke Maersk- or IBM-only solution,” Michael White, head of global trade digitization at Maersk, told CoinDesk While Maersk and IBM remain the only two shareholders, and both invested in the technology and jointly own the IP, White emphasized it is completely open to ecosystem participants. “It was never about a joint venture,” he said, although the Maersk press release for the launch described it as such. However an IBM spokesperson said the original 49/51 percent ownership split will no longer apply under the collaboration model the two are now going to market with, in response to feedback from the industry.

Both IBM and Maersk will sell access to the TradeLens platform. The selling party will contract with the customer and receive all the fees and revenue rather than sharing it with the other partner, the IBM representative added. This new model allows them to bring the solution to market faster, and be more flexible than the previously planned joint venture model, the spokesperson said.  TradeLens is built on the IBM Blockchain platform, which uses the open source relative of Linux, Hyperledger Fabric, and this presents a possible interplay with other IBM and Hyperledger projects.

“We have architected all of these solutions so that it’s very easy for data to be exchanged between the two different blockchains – take TradeLens and IBM Food Trust for example – if clients were to be inclined,” said Todd Scott, the vice president of global trade at IBM Blockchain. To help foster this open supply chain ecosystem, TradeLens is pushing its open APIs for shipping as well as work being done with shipping standards bodies such as CEFACT and industry groups such as OpenShipping.org.