Blockchain – The Most Disruptive Invention since the Internet 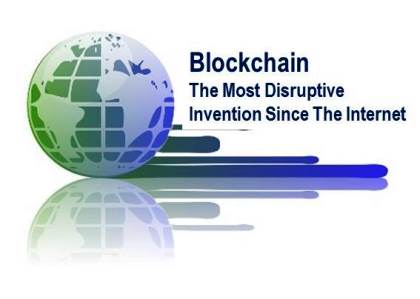 By now you are sure to have heard of Bitcoin and the blockchain technology. Even so, very few people seem to realize that the blockchain won’t just kill banks, brokers and credit card companies. It will change every transactional process you know.

Simply put, blockchain eliminates the need for clearinghouse entities of any kind. This means a revolution is coming, a fundamental sea change in the way we do business.

A blockchain carries no transaction cost. The blockchain is a simple yet ingenious way of passing information from A to B in a fully automated and safe manner. One party to a transaction initiates the process by creating a block. This block is verified by thousands, perhaps millions of computers distributed around the net. The verified block is added to a chain, which is stored across the net, creating not just a unique record, but a unique record with a unique history. Falsifying a single record would mean falsifying the entire chain in millions of instances. That is virtually impossible. Bitcoin uses this model for monetary transactions, but it can be deployed in many other ways.

Think of a railway company. We buy tickets on an app or the web. The credit card company takes a cut for processing the transaction. With blockchain, not only can the railway operator save on credit card processing fees, it can move the entire ticketing process to the blockchain. The two parties in the transaction are the railway company and the passenger. The ticket is a block, which will be added to a ticket blockchain. Just as a monetary transaction on blockchain is a unique, independently verifiable and un-falsifiable record (like Bitcoin), so can your ticket be.

Incidentally, the final ticket blockchain is also a record of all transactions for, say, a certain train route, or even the entire train network, comprising every ticket ever sold, every journey ever taken.

But the key here is this: it’s free. Not only can the blockchain transfer and store money, it can replace all processes and business models, which rely on charging a small fee for a transaction.

Here is another example. The gig economy hub Fivver charges 0.5 dollars on a 5 transaction between individuals buying and selling services. Using blockchain technology the transaction is free. Ergo, Fivver will cease to exist. So will auction houses and any other business entity based on the market-maker principle.

Even recent entrants like Uber and AirBnB are threatened by blockchain technology. All you need to do is encode the transactional information for a car ride or an overnight stay, and again you have a perfectly safe way that disrupts the business model of the companies, which have just begun to challenge the traditional economy. We are not just cutting out the fee-processing middle-man, we are also eliminating the need for the match-making platform.

Because blockchain transactions are free, you can charge minuscule amounts, say 1/100 of a cent for a video view or article read. Why should one pay The Economist or National Geographic an annual subscription fee if one can pay per article on Facebook or a favorite chat app. Again, remember that blockchain transactions carry no transaction cost. You can charge for anything in any amount without worrying about third parties cutting into your profits.

Blockchain may make selling recorded music profitable again for artists by cutting out music companies and distributors like Apple or Spotify. The music you buy could even be encoded in the blockchain itself, making it a cloud archive for any song purchased. Because the amounts charged can be so small, subscription and streaming services will become irrelevant.

It goes further. EBooks could be fitted with blockchain code. Instead of Amazon taking a cut, and the credit card company earning money on the sale, the books would circulate in encoded form and a successful blockchain transaction would transfer money to the author and unlock the book. Transfer ALL the money to the author, not just meager royalties. You could do this on a book review website like Goodreads, or on your own website. The marketplace Amazon is then unnecessary. Successful iterations could even include reviews and other third-party information about the book.

In the financial world the applications are more obvious and the revolutionary changes more imminent. Blockchain will change the way stock exchanges work, loans are bundled, and insurances contracted. They will eliminate bank accounts and practically all services offered by banks. Almost every financial institution will go bankrupt or be forced to change fundamentally, once the advantages of a safe ledger without transaction fees is widely understood and implemented. After all, the financial system is built on taking a small cut of your money for the privilege of facilitating a transaction. Bankers will become mere advisers, not gatekeepers of money. Stock brokers will no longer be able to earn commissions and the buy/sell spread will disappear.

Blockchain technology could even bring down Google. It makes all its money charging for ads. But who needs centralized ads in a universe of minimal free transactions? A dedicated ad blockchain – like the one for eBooks – for text and display ads would offer all the functionality of Google Ad Words without paying Google a cent. Instead website owners and those who click on the ad would pocket the money. If other search engines are quick enough to adapt, this may be the beginning of the end of Google.

It will certainly hasten the demise of email. Already threatened by integrated chat apps like Line and WeChat, and soon Messenger and Whatsapp (see here), emails are nothing else but 1-1 transactions. A sends piece of text to B. Transaction is verified, encoded, executed, and kept on record in a distributed network owned by no-one. Blockchain will make email safer, not to mention potentially spam-free. If one email costs a miniscule amount, we will be happy to pay for it if it is safe. For spammers, sending mails to millions of accounts will no longer be economical.

Another application are medical records. Not just paying for your doctors fee, but an actual blockchain for each person with all the relevant medical data. Seeing the doctor would unlock the information. You will be able to visit any hospital in the world with your entire medical history, vital signs, and even complete DNA encoded as a safe, un-falsifiable, blockchain record, not owned by any insurer or data host like Apple Health.

Education is the next candidate. Going to school is nothing else but paying money (the taxpayers’ or your own) to receive credits and certificates. In other words, a transaction. Which is exactly what blockchain does. Your grades will be encoded in your personal education blockchain.

Combine all the above together and you have a unique and permanent record of an individual’s life, transaction by transaction, from the cradle to the grave, as one long unique personal blockchain. Blockchain won’t just replace banks and transactional business processes, they will replace IDs, passports, fingerprints and other biometric options too, if deployed right. Because the blockchain exists in millions of copies simultaneously, it is un-falsifiable. Any attempt to even alter one bit in your personal transactional record would immediately be spotted.

Yes, bitcoin exchanges have been hacked. But never the blockchain itself. It cannot be hacked, at least not in a way we currently understand. So just to make things clear: I don’t think Bitcoin is the future. Bitcoin is just one incarnation of the blockchain principle. But blockchain technology is here to stay, regardless of hacking concerns. What’s more, blockchain technology itself could prevent hacking. A mischievous login into a system – the most common way of hacking – is essentially a transaction.

Substituting this procedure with a blockchain recording every login ever made would make it completely unhackable, since it would involve changing the login chain on millions of computers simultaneously. No need for fingerprints or iris scans either.

The applications described will create a need for a massive increase in computing power, but the author does not see that as a problem. Quantum computing will be uniquely positioned to take care of that. Dedicated system will be deployed to manage blockchain with unimaginable speed.

One can barely think of an industry, process, or technology not disruptable by blockchain, which is why the author considers it the most fascinating and disruptive invention since the Internet itself. It has the potential to undermine government sovereignty but it could also be a huge boon for bureaucrats. All interactions between citizens and government are essentially transactions, from birth records to ownership transfers of real estate. All can be simplified and made tamper-proof by using blockchain.

Because each transaction block is linked to its history and verified in millions of instances, it completely eliminates the problem of trust inherent in existing transaction models. The author does not think even its inventor realized how widespread the technology could be used.

The deceptively simple blockchain technology has the power to end corruption and crime, perhaps even the need for government oversight. Personalized, that is, non-anonymous blockchain records, would be far safer than passport checks. Replacing currencies with blockchain would give criminals a really hard time. Think of it this way: with personal financial blockchain, every coin and banknote you ever held in your hands would be transactionally linked to you permanently.

In the shorter term, blockchain certainly will impact the financial world first, then go on to replace business models based on charging for transactions. But because it can be used to safely encode ANY transaction, it has the potential to become not just the first global currency

ever, but a universal way to store transactional information. Once we figure out the tremendous implications this has for both the economy and privacy of course.