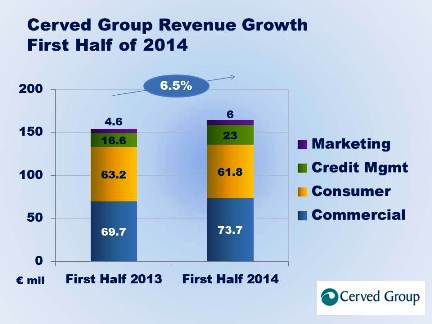 Cerved Group reported revenue growth for the first half of 2014 of 6.5%.  The group listed on the Milan Stock Exchange on June 24, 2014 and raised 490 million Euros representing a market capitalization of approximately 995 million Euros (see chart).

On August 28th 2014 the Board of Directors of Cerved Information Solutions S.p.A. (MTA: CERV) – the parent holding company of the Cerved Group, has approved the results for the Semiannual Financial Report as of 30 June 2014.

Gianandrea De Bernardis, Chief Executive Officer of the Group, commented: “The solid results of the first half of the year not only reach our expectations both in terms of revenues and operating margins but once again confirm the resiliency of Cerved’s business model, which has allowed it to grow despite the difficult macroeconomic situation in Italy”.

“The growth was driven by all of Cerved’s divisions: Credit Information, Credit Management and Marketing Solutions. In particular I wish to highlight the performance of the Credit Management division – business area in which we have confirmed and strengthened our position as the leading independent operator in Italy – and of the Cerved Rating Agency which has entered into the public ratings market, as well as of the Marketing Solutions division which is continuing to grow”. “Having successfully completed the listing on the Milan Stock Exchange, the Group is now concentrated on executing its growth and expansion strategy via the extension and completion of its product offering to further reinforce its leading position as acknowledged by financial institutions, companies, professionals and the Public Administration”.As anticipated on 24 July with the press release regarding preliminary Revenue and EBITDA results for the first half of 2014, with respect to the period from 1 January 2014 to 30 June 2014, the Group’s consolidated revenues were Euro 164,1 million, +6,5% compared to the first half of 2013. On an organic basis, the growth was 5,3%, an improvement compared to the 2011-2013 period when the CAGR was 4,0%.

The results show growth across all business areas of the Group.  We wish to highlight, in particular, the strong growth in the Credit Management division which benefited from the intake of credit portfolios during the course of 2013 and from the Marketing Solutions division which is continuing to benefit from the renewal and extension of its product offering as well as from the restructuring of its sales force.

With respect to the Credit Information division, the continuing growth of the corporate segment is attributable to increased consumption of data by clients, efficiency gains within Cerved’s sales force, and to the acquisition of Experian Data Services. The financial institutions client base is instead registering a contraction in revenues due to the renegotiation in 2013 of a number of important contracts. As for revenues, all of the Group’s divisions registered an increase in EBITDA, with particularly strong results in the Credit Management and Marketing Solutions divisions. Furthermore, we wish to highlight that the Group’s EBITDA margin was 48,3%, virtually unchanged compared to the prior year.

Analysis of the Net Financial Debt: As of 30 June 2014, the net financial debt of the Group reached Euro 512,1 million, which compares with Euro 722,2 million as of 31 December 2013. The decline reflects the issuance of 45 million shares at a unit price of Euro 5,1 Euro, for a total of Euro 229,5 million, within the context of the listing of the shares of Cerved Information Solutions S.p.A. on the Milan Stock Exchange.