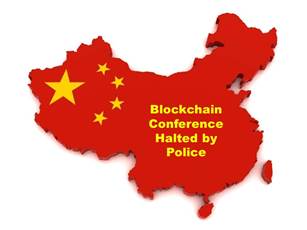 A blockchain-themed conference in Shanghai was recently abruptly suspended by police.

The one-day event, dubbed the Global Fintech & Blockchain China Summit 2018 and organized by a business conference organizer called PTP International, was originally scheduled for April 12.  About mid-day the conferences was halted byu police, and all attendees and organizers of the event were removed from the venue. The afternoon session of the event was also cancelled.

According to the summit’s website, the event was to feature keynote speeches, panel discussions and exhibits from financial institutions, government and cryptocurrency projects.   PTP International issued the following statement:

“We are still investigating the reasons of the halt, and so far the explanation offered by the police is due to security risk. We are working on a solutiregarding how to make up for event attendees. The conference is in compliance with the regulation in China and does not feature any ICO roadshow.”