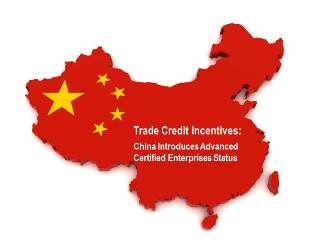 A trade credit incentive mechanism was jointly unveiled by Chinese authorities recently to promote the credibility and standard of Chinese enterprises in carrying out cross-border business and boost international trade.

The General Administration of Customs, National Development and Reform Commission (NCRC) and Bank of China (BOC) jointly initiated the credit incentives program by signing a memo to give qualified enterprises better and faster customs service by simplifying clearance procedure.

Enterprises with a high rank will be given Advanced Certified Enterprises (ACEs) status, which is in line with the international practice authorized by the World Customs Organization.

There are four grades in the credit rating system, authorized by the General Administration of Customs. Only one percent of enterprises are eligible to get the ACE status.

From now on, the customs authority will share the name list and updated information of the ACEs with NDRC and BOC, and 40 other ministries that also signed the memo.

“In that case, ACEs will have to act by rules and avoid dishonesty in not only the cross-border trade, but all other aspects, to keep the title, as different government departments are able to record and share companies’ unreliable behaviors in one system,” said Meng Yang, director of the department of Audit-based control and risk management at the GAC.

The incentive mechanism will mainly benefit ACEs with lowered tax and simplified inspections, to encourage enterprises to perfect their credit management and meet the credit standard of World Customs Organization.