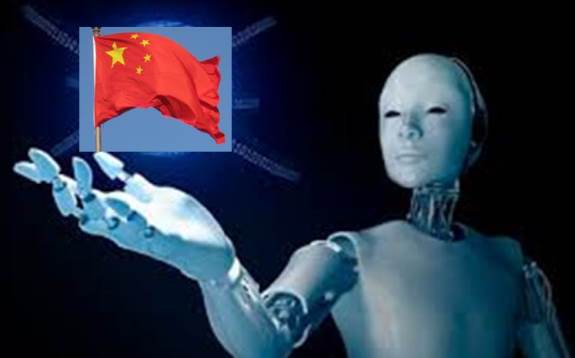 China’s once-hot artificial intelligence sector is in a funk: spurned by investors, failing to deliver on cutting-edge technology and struggling to generate returns.  It is a far cry from last year, when Beijing issued plans to lead the world in AI by 2030, venture capital investors were pumping up valuations and China’s tech giants peppered their earnings calls liberally with their AI ambitions.

Disillusionment with the progress of AI is not unique to China.  In the US, IBM laid off engineers at its flagship AI IBM Watson in the summer. Earlier Gary Marcus, a psychology professor at New York University and longtime sceptic lamented that “six decades into the history of AI, our bots do little more than play music, sweep floors and bid on advertisements”.

But China, where the hype — and funding — went into overdrive last year, the reversal has cut more deeply. China last year overtook the US in terms of private sector investment, pulling in just shy of $5bn, but the $1.6bn invested in the first six months of this year is less than one-third of US levels, according to ABI Research. “[We’re] at a juncture where the generic use cases have been addressed,” said Lian Jye Su, principle analyst at the consultancy. “And building generic general purpose chatbots is much easier than specific algorithms for industries like banking, construction, or mining because you need industry knowledge and buy-in from the industry.”

That inflection point has combined with a shortage of computing capacity to power algorithms and machine learning.  What is left is familiar ground for tech investors: inflated valuations, over-hyped pitches and threadbare monetisation models. “We feel it’s a little bit over-invested,” said Nisa Leung, managing partner at Qiming Venture Partners, a big investor in China tech. “Many companies are unable to ramp up their monetisation or they are over-promising their ability.” 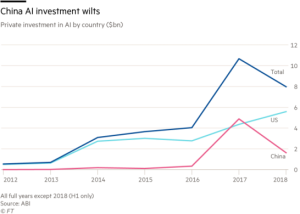 Venture capital appetite has waned as valuations have soared, a trend amplified by the drying up of renminbi funding.

“If you had five engineers from Baidu or Google starting with nothing — that company today may be valued at $60m to $80m. Nine months ago it would have been $110m,” said Kai-Fu Lee, who headed up Google’s operations in China at and now runs the VC firm Sinovation Ventures. He anticipated further falls: “It probably should be below $50m”. For early-stage investor ZhenFund, the high point for machine learning and other AI investments was around 2012-2015. “I don’t see too many innovative new AI start-ups at the moment,” said chief executive and partner Anna Fang. While many see industry specific applications as the next big leap forward, there are still opportunities in what Wei Zhou, who led the investments in China tech at Kleiner Perkins Caufield Byers before setting up China Creation Ventures, called “good enough” technology. “US investors always want to invest in cutting edge technology, so for them they are always thinking of advanced AI,” he said. “But for us, we are looking for these kinds of ‘good enough’ AI to make a difference.”

As a case in point he cited a recent investment in an online English learning company that falls short of one-on-one conversations with students but customises sufficient scenarios depending on the student’s response — wrong answer, correct answer — to make the user feel they have a real teacher. “It’s not magical,” he said, but it brings the cost of tuition down to under $1. Such applications have the advantage of addressing China-specific problems, like a dearth of English language teachers, without requiring cutting edge technology or significant computing power.

The latter is perhaps the biggest gap in China’s AI arsenal, and explains this year’s move by the big Chinese tech companies into hardware. Baidu, Huawei and Alibaba are among those working on building their own AI chipsets, and the ecommerce group is also spearheading a drive into quantum computing.

Alibaba wants to have its first artificial intelligence chips on the market next year, although there is some scepticism over Chinese companies’ ability to accelerate development in the field. For now, the chips driving much of China’s AI are from US chipmakers such as Qualcomm or Nvidia, and the software is also largely from overseas. “The simple fact is most of the large players in China use the US platforms and software tools such as TensorFlow,” wrote UBS analysts in a recent report, drawing an analogy to mobile phones, where popular Chinese apps sit atop Apple and Google operating systems.

China has been made starkly aware of this weakness. A US ban, since rescinded, on selling parts to handset maker ZTE as punishment for ignoring earlier penalties meted out for sanction-busting sales to Iran, was a wake-up call for many China tech players. Building the chips and computing capacity also sits with Beijing’s aims, outlined in the Made in China 2025 industrial policy, to ramp up self sufficiency.

But there are large hurdles that China’s AI sector has yet to jump. Industries need to work together with tech companies to develop specialised AI, while tech companies need to ramp up processing power and start-ups to be more realistic, said Mr Su. Even then, he warned: “It will be slower. Returns on investment will be lower. It will take a longer time to recoup investments.