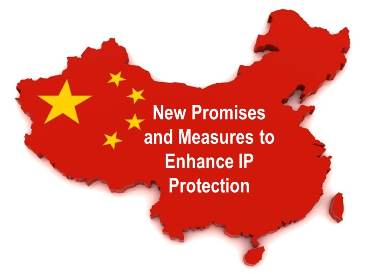 At the end of November 2016, China issued a high-profile policy statement on protection of property rights (http://www.gov.cn/zhengce/2016-11/27/content_5138533.htm) in the joint name of the all-powerful Central Committee of the Communist Party of China (“CCCPC”, which is the actually ruling body of China under the leadership of the Politburo) and the State Council (the cabinet). The statement includes a section devoted to IP rights.

As follow-up actions, the PRC Supreme People’s Court (“SPC”) then issued a judicial statement setting out measures the judiciary is to take to implement the central government’s statement, and the State Intellectual Property Office (“SIPO”) also issued a statement of measures it will take on patent prosecution, invalidation and administrative enforcement.

There are extensive comments on the CCCPC and State Council’ statement that it is intended to address the concern that many of the new rich in China are transferring their assets out of China by giving them assurance that their private properties will be protected equally as state properties.

Nonetheless, all the 3 statements when put together still convey a clear message that China will take specific measures to enhance IP protection. For example, it appears that the authorities have reached consensus that punitive damages toward willful infringement should be also codified into the Patent Law and Copyright Law as it has been done for trademark infringement. Some of the measures proposed by SPC and SIPO are specific enough to affect the actual practice soon.

The following are some new policies and measures specifically given in the statements which could be implemented soon or are already in the process of implementation and which could have material effect on IP owners and other stake holders’ interests.

It should be noted that particularly for patents, punitive damages could be a double-edge sword for foreign entities, as Chinese patent owners have become more and more assertive to enforce their patents against foreign companies.

SPC in its statement says that it will explore the possibility of setting up circuit tribunals based on the specialized IP court created in Beijing, Shanghai and Guangzhou. This could be particularly meaningful for the Guangzhou IP Court which has jurisdiction over the whole Guangdong Province (except Shenzhen).

The SPC statement also reiterates the exploration of setting up one or more IP appeals court.

SIPO’s current rules require an oral hearing for all administrative enforcement proceedings. It now states that when the patent being asserted is a utility model or design patent and the patent owner has provided a positive Patentability Assessment Report, the local authority may make a decision without an oral hearing. This would mean a much faster pace of the proceedings.

SIPO has announced that its Fast IP Enforcement Centers in 6 locations could conclude an administrative enforcement action within 1 month (most cases handled by these centers are about design patents).

This relates to the local IP office’s evidence collection power in administrative enforcement proceedings. A measure proposed by SIPO would put an accused infringer into the government’s credit blacklist if it resists the local IP office’s evidence collection efforts. Hopefully this will add actual pressure on the accused infringers.

This still relates to SIPO’s efforts to improve its administrative enforcement capabilities.

Administrative enforcement has a traditional weakness that officials in local IP offices are short of officials with the necessary expertise on infringement analysis. SIPO has started the practice of enlisting various outside experts such as local practitioners into an official bank of experts, so that the officials handling an actual case can select experts from the bank and consult with them before making its decision. SIPO apparently will reinforce this effort.

(6) Feedback from enforcement to patent examination

By this measure, SIPO’s purpose is to establish a better coordination between enforcement and examination/invalidation.

Further details would be needed to better understand how this measure will be implemented.

(7) Feedback from patent examination/invalidation to enforcement

This also relates to SIPO’s goal for a better coordination between enforcement and examination/invalidation.