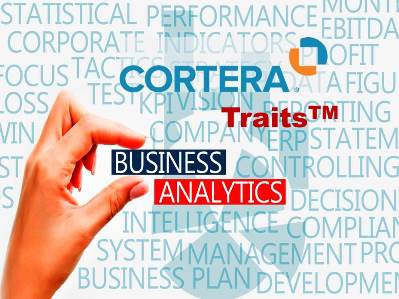 Cortera, Inc. is pleased to announce the introduction of TraitsTM, a software tool that automatically creates statistical models in real-time to describe the patterns found in a group of companies, dramatically reducing typical modeling time and complexity. Traits users simply upload a file of companies that share a common outcome – such as customer profitability, loan performance, trade credit payment behavior, response to a promotional offer, etc. – and Traits appends Cortera’s library of 300+ variables to the records.

The equation generator within Traits then identifies the significant factors that the companies have in common and creates a statistical algorithm that describes the common characteristics.  The Traits model summary includes measures describing the performance and accuracy of the model, which varies based on the degree of similarity of the input records.  With the fast turnaround time provided by the Traits model creation, variations on the input files can be made to see the corresponding impact on the model’s predictiveness. Retroactive dates can also be included on the input file to append data from a historical point in time at a record-by-record level.  With Traits, model development timelines can be shortened from weeks to minutes.

“We’re excited to bring Traits to market as part of our efforts to enable widespread access to more sophisticated analytics about businesses,” said Cortera’s CEO, Jim Swift.  “As the amount of data about businesses continues to expand, the bottleneck is increasingly becoming the availability of people and tools to sort through the data and find the insights companies need to make leaps forward in productivity.  For the many companies without statisticians on staff, Traits provides a tool that doesn’t require a deep statistical background, effectively increasing the number of people that can create and benefit from analytics. Statisticians can also use Traits to quickly narrow down the variables that matter most and to run a larger number of iterations to tune performance.  We believe the democratization of analytics through tools such as Traits is essential for the rapid evolution and expansion of analytics solutions.  Let’s smash through the technical barriers and free more people up to find breakthrough solutions for their companies and industries.”

Once a Traits model is created, it is saved in the model library and available for use in the scoring of other input files.  Each file to be scored is uploaded into Traits, where the model variables are appended and the records are scored in real-time.  Models created in Traits are also available to score records submitted through Cortera’s Connect XML interface, enabling real-time scoring from within ERP, CRM and other systems.