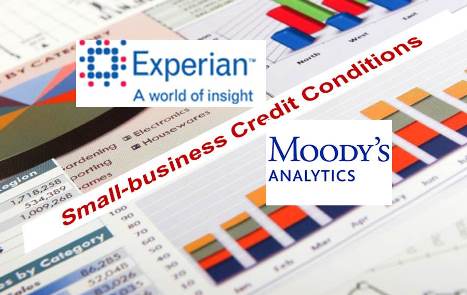 Credit utilization rates expanded briskly in the first quarter of 2017. Taken with upside risk, which at the moment outweighs downside risk, credit conditions for small businesses are looking up. Rates of severe delinquency are declining broadly, and credit constraints should ease as a result. However, balance growth is threatened by the lack of clarity regarding fiscal policies. Small-business credit will be defined this year by what happens with the potential revisions to government policies and how full or nearly full employment translates into activity for small firms.

Small-business delinquencies started the year off right. Both the 30- and 91+-days past-due categories declined in the first quarter, while the 60- and 90-day buckets were nearly unchanged. This continues the trend established over the last two years and was to be expected, given the continued growth in the economy.

Small-business confidence has come down from recent highs, but consumer confidence has continued to rise. As talk of tax policy was pushed out of the first quarter, small businesses adjusted their confidence down. Consumers, on the other hand, were encouraged as income gains continued and the unemployment rate kept trending lower. The economy has moved closer to, or even into, full employment.

As confidence in the economy has elevated, utilization of credit among small businesses has increased. Credit balances were up 8.8 percent year-over-year, while available credit increased by 4.5 percent. Additionally, utilization rates have now risen for four consecutive quarters. Previous increases were modest, with the rate of utilization rising less than one-half of a percentage point, but in the first quarter utilization rose by 1.8 percentage points to 41.8 percent. Although a single data point doesn’t make a trend, utilization rates certainly appear to have turned a corner and look set to rise going forward, provided business confidence holds up.