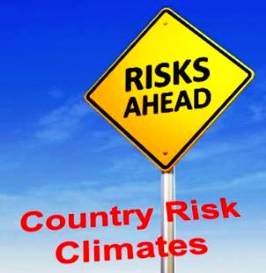 BURKINA FASO: The new military rulers are under intense pressure to hand power to a civilian government, but for now uncertainty prevails that is not doing the economy any good.  Developments are being watched with concern by France and the US, for which the country has been a key ally in the regional fight against al-Qaeda and its offshoots.

IRELAND:  The economy continues to do remarkably well and quickening growth has given the government space to gear back fiscal austerity measures planned for next year. Dublin is aiming to close a tax loophole bitterly resented by other EU governments and the US, but another loophole for multinationals is being opened wider and Ireland is not likely to lose much of its attraction.

ITALY:  Much has been made in the international press of the fact that of 25 European banks that failed a stress test by the ECB one-third are Italian. This is far from indicating, though, that there is a systemic problem. Italian borrowing costs have gone up, but fiscal plans have been cleared by the European Commission.

LATVIA:  The country has a new government excluding the party that won the most votes in the elections. The strong showing of the Moscow-connected Harmony party remains awkward for Latvia. As it is, the country now faces an increased Russian threat as the new normal

RUSSIA:  The steep decline of oil prices does not pose an immediate threat to Russia’s financial position, but in the longer run persistently low prices, their impact reinforced by Western sanctions, could cause severe headaches for Pres. Putin’s regime. For now, it is hurting economic growth.

SWEDEN: The Riksbank has lowered its benchmark interest rate to zero and pushed out the time when it expects to start a slow increase, but this will not be enough to eliminate any risk of deflation. “Non-conventional” steps will be required as well. Business leaders have started to worry about the plans of the new minority government.

UNITED KINGDOM:  The latest statistics show an economy that is slowing down, so the BofE will probably continue to leave monetary conditions accommodating and interest rates low. There is, however, also concern about Prime Minister Cameron’s tax cut pledges and the effects on the pound of a rapidly growing current-account BoP deficit.

UNITED STATES: There will be more legislative action in the wake of the elections, certainly once the lame-duck period between now and New Year is over. What can be achieved, given deep-seated divisions, is another question, but there are some areas where bi-partisan support may now be found. The economy will be the better for it.