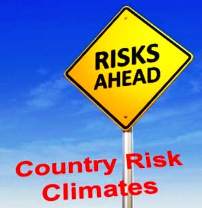 COLOMBIA: Colombia’s was the fastest-growing among major Latin American economies in the third quarter. It will be hurt by the plunge in oil prices, but the exchange market drop of the peso will help exporters of other goods and of services. The government has launched a hugely ambitious infrastructure program and hopes that the private sector will finance much of it.

CUBA: There is a great divide between those who praise President Obama’s decision to try and move toward “normal relations” with Havana and those who criticize it. Exactly what the ultimate outcome will be is difficult to foretell, since only a gradual easing of contacts has been set in motion. Still, for Cuba the deal is a major coup.

EGYPT: The CB is holding the currency steady, but will probably consent to an at least modest devaluation eventually. There are indications that the worst for the economy is over. The regime keeps tightening its grip and, while it does have a security problem in the Sinai peninsula, it represents in many respects a return of the old order.

INDIA: PM Modi’s government is continuing to chip away at constraints that are holding back economic growth, but the deeper, longer-term reforms that are needed will take time. The Premier has a new team in place and his ability to connect with the people is a major asset. External trends are apt to improve.

Libya:  Fighting is threatening to shut down the one source of income the country still has. Many importers are having difficulties paying their bills in what can only be described as an administrative mess. As jihadis forge alliances, fears grow of an ISIS expansion into North Africa. Nations to the South of Libya worry about contagion.

PAKISTAN:  The heinous attack by the Taliban on a school has prompted assertions that the armed forces will now go after all the terrorists, without exception. One might be tempted to take this with a grain of salt. There are reasons, though, why there may now be a new mood in the highest echelons of Pakistan’s establishment.

POLAND:  Former PM Tusk has taken over as president of the European Council. His replacement in Warsaw, widely expected to accomplish little of note, will do better than anticipated. She will govern against the backdrop of rising Russian threats and the need to make important geopolitical decisions.

RUSSIA: Now that the steepest interest rate hike since the global financial crisis has failed to give the tumbling ruble lasting support, the authorities are looking at a diminishing list of options. They have few conventional measures left and may have to resort to capital controls.