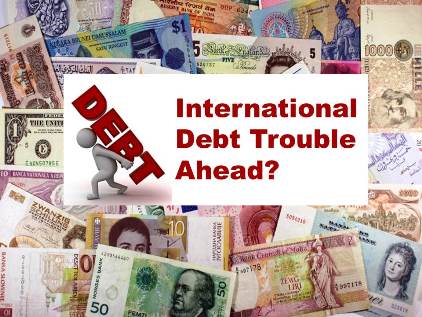 Over the last several months the amount of dollar debt accumulated in the emerging markets has become a concern for the likes of the IMF and others. This is connected to a number of economic developments over the past year or so – slow growth in some of these nations, the low interest rates in the US and the lack of alternatives in other parts of the world. The fact is that developed nations sold a record amount of dollar debt in the first quarter of this year -$179 billion. This is twice what was raised a year ago in the same time period. The sense is that many of those who are accessing the debt are anticipating a tightening of the market and want to get their bid in sooner than later.

Analysis:  The prime concern is that these debt buyers are going to struggle if there are the expected shifts in the market over the next year or so. Interest rates are heading up in the US and that is going to make refinancing existing debt that much harder. The dollar is going up and that will present another set of issues as it will be costlier to get the money needed to service that debt.

The level of dollar debt in the emerging markets was at $3.6 trillion in the third quarter of last year and that is an all-time high. The binging has been understandable given the low rates and all the other encouragements but now it has reached a point that collapse is a distinct possibility. The most likely scenario is that companies and governments will struggle with handling this debt load but will not collapse. They will face constraints as far as their budgets are concerned and it will be ever more expensive to keep pace with existing debt service. Given that none of the predictions for the future include a sharp reduction in global interest rates or even the significant weakening of the dollar the debt overhang will plague these states for a long time.

The IMF in its most recent report asserts there is a risk of exposure for $135 billion as investors have started to become more risk averse as these debt loads become more pronounced. The possibility of severe credit issues for corporate debt is mounting and there is not much that could be reasonably done about this in the short term. This is perhaps the most persistent fear. There are no policy options

that could be pursued that would have much impact short of reversing the current strategy and extending rock bottom interest rates into the future.