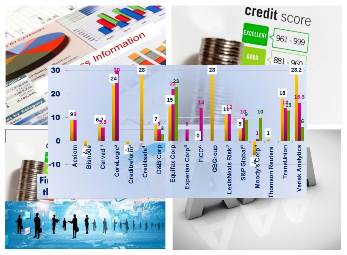 Here is a summary of major Q3 earnings report releases as of November 03, 2016.  It is an update of our recent announcement:

TransUnion total revenue was $438 million, an increase of 12 percent (13 percent on a constant currency basis).

S&P Global reported third quarter 2016 results with revenue of $1.44 billion, an increase of 9% compared to the same period last year. Net income and diluted earnings per share were $892 million and $3.36, respectively which included a pre-tax gain of $722 million from the sale of J.D. Power.

S&P Global Market Intelligence: Revenue increased 21% to $429 million in the third quarter of 2016 compared to the same period last year, while organic revenue grew 7%.  Due to the SNL acquisition, organic growth, and progress on integration-related synergies, quarterly operating profit increased 112% to $112 million and adjusted operating profit increased 43% to $135 million.  The operating margin improved 1,120 basis points to 26% and the adjusted operating margin improved 480 basis points to 31%.

S&P Dow Jones Indices: Revenue increased 6% to $164 million in the third quarter of 2016 compared to the same period last year.

S&P Global Platts (includes J.D. Power results through September 7, 2016):  Revenue decreased 8% to $229 million primarily because the current period only included two months of J.D. Power revenue.   Organic revenue grew 4% for the segment excluding revenue from the acquisitions of RigData and PIRA, and excluding the results of J.D. Power for the period.

To read the full reports you will need to log on. The chart below will be updated as earnings announcements become available.