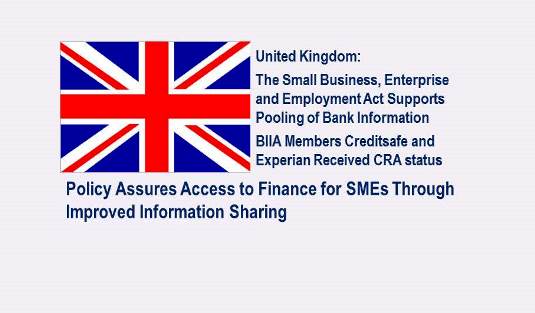 Creditsafe confirmed that it the UK Government has recommended it as a designated credit reference agency (CRA).  The new appointment, announced in yesterday’s Autumn Statement, means that Creditsafe is one of only three CRAs that will be trusted by HM Treasury to receive SME credit information held by banks.  It will contribute to a wider initiative introduced by the Small Business Act 2015 to increase financing opportunities for smaller businesses.

Creditsafe’s role as a designated CRA will be to receive SME credit information from designated banks and provide equal access to this information to all finance providers. This is a significant milestone in a major structural reform that will promote competition in the SME credit market.

During the application process the British Business Bank which was handling the process for Government stated: “The control of credit information by existing providers is a barrier to entry in the market for lending to smaller businesses. Opening up access to credit data held by the big banks will increase the reliability of credit scores, enabling alternative finance providers to make better-informed decisions about finance provision to smaller businesses.”

Creditsafe has been recommended to be designated as a CRA following a detailed due diligence procedure that analysed agencies’ capabilities in areas such as in-house product development skills to support the integration of bank data with existing credit reports, security and governance management and certification to relevant quality standards including ISO/IEC 27001:2013.

The Creditsafe Group is one of the world’s most used supplier of company business intelligence with 10 Creditsafe Group reports downloaded every second.  Privately owned and independently minded Creditsafe is looking to change the way business information is used by providing high quality data in an easy to use format that allows everyone in an organisation can benefit from.  Launched in Norway in 1997, Creditsafe has offices in the UK, Germany, France, Sweden, Ireland, Italy, Belgium, the Netherlands and the USA employing over 1000 people and has more than 80,000 subscription customers, across the group.

The announcement of UK government came as part of the Chancellor of the Exchequer, George Osborne’s Budget Statement on Wednesday 8 July 2015, on the state of the national finances, Government’s proposals for changes to taxation and growth forecasts.  The Chancellor’s statement reads as follows:

1.221 To support small and medium sized enterprises (SMEs) in accessing finance, the government plans to designate Experian, Equifax and CreditSafe under the Small and Medium Sized Business (Credit Information) Regulations 2015. These CRAs will receive SME credit information from designated banks and provide equal access to this information to all finance providers. This is a significant milestone in a major structural reform that will promote competition in the SME credit market.