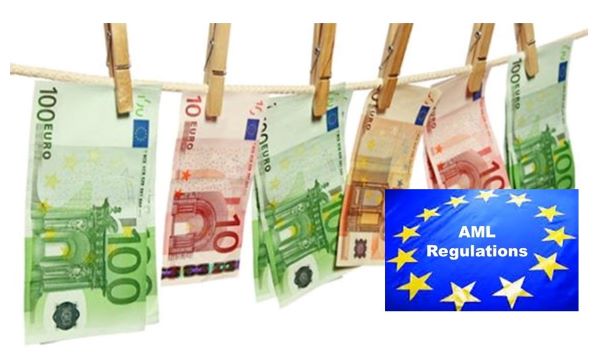 Incoming EU-level reforms to anti-money laundering laws are set to take legal effect on January 10, introducing new requirements for banks handling transactions linked to high-risk countries.  EU member states are expected to write the 5th Anti-Money Laundering Directive (5AMLD) into national law by the end of this week, tightening controls around the illicit movement of funds. The UK and Germany are among those set to introduce the new rules on time.

The 5AMLD was initially constructed as emergency amendment to the previous directive, finalised in May 2015, after concerns in Brussels about opaque financial flows exposed by the Panama Papers scandal, as well as a string of terrorist attacks across Europe.

Attempting to stop the movement of illicit funds across international borders is one of the new text’s priorities, and banks – considered “obliged entities” and so covered by the 5AMLD – will face more stringent demands when executing transactions linked to countries deemed to pose a high risk of financial crime.

The demand for greater scrutiny over high-risk international transactions is not new for banks in the EU. In the trade finance sector, legally binding guidelines have been in place since March 2018 – prior to the introduction of 5AMLD – that flesh out how enhanced due diligence should be carried out.

Those guidelines, drafted by the European Banking Authority, acknowledge banks can sometimes have little oversight of an underlying trade when executing a transaction. They suggest financial institutions use company registries and third-party intelligence sources to obtain information on their clients, and use their professional judgement to decide whether ongoing pricing makes commercial sense, particularly for commodities trading.

However, the water is being muddied by a dispute between the European Commission and Council over which countries are considered high risk in terms of money laundering.

The first European Commission blacklist was produced in July 2016 and amended regularly over the following two years.

In February 2018, however, the European Council criticised the list for too closely following a register maintained by the Financial Action Task Force, a worldwide standards-setter for anti-money laundering. The group of EU finance ministers that comprise the European Council argued the methodology used should be more transparent and better tailored to the specific threats facing Europe.

The commission responded by tabling a significantly amended list in February last year.

That would have seen eight countries added – The Bahamas, Botswana, Ghana, Libya, Nigeria, Panama, Samoa and Saudi Arabia – as well as US territories American Samoa, Guam, Puerto Rico and the US Virgin Islands.

Five nations would have been removed: Bosnia and Herzegovina, Guyana, Lao, Uganda and Vanuatu.

The updated list was rejected by the European Council, however, in March 2019 after ministers again claimed it “was not established in a transparent and resilient process that actively incentivises affected countries to take decisive action”.

European Parliament representatives had also previously questioned the wisdom of including important EU trade allies on the list, given the possibility banks could become more risk-averse to clients operating in those jurisdictions.  The European Commission is now due to produce a new proposed blacklist using an updated methodology, but there is so far little indication of when that work is likely to be completed.

To read the full report click on the link below.