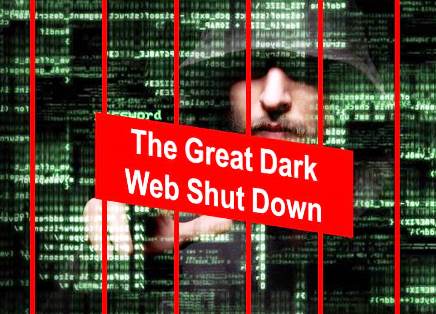 AlphaBay and Hansa, two of the largest “dark web” marketplaces for illegal and illicit items such as drugs and guns, have been shut down, the US Justice Department said on Thursday 20th July.

Police in the US and Europe, including the US Federal Bureau of Investigation (FBI), the Drug Enforcement Agency (DEA) and the Dutch National Police, partnered to shutter the sites accused of allowing thousands of vendors to sell illegal drugs, of which Europol said there were 250,000 listings on AlphaBay alone, with 200,000 members and 40,000 vendors.

The sites operated on the Tor network, which helps users browse the internet anonymously. Visitors to the online marketplaces paid through digital currencies such as Bitcoin.

AlphaBay mysteriously went offline earlier this month fuelling suspicions among users that law enforcement action had taken place. It was widely considered the biggest online black market for drugs, estimated to host daily transactions totalling hundreds of thousands of pounds after filling the gap left by the takedown of Silk Road in 2013 by the FBI. FBI acting director Andrew McCabe said AlphaBay was 10 times as large as the Silk Road.

The site allowed users to sell and buy opioids, including fentanyl and heroin. US attorney general Jeff Sessions said at a briefing in Washington DC: “We know of several Americans who were killed by drugs on AlphaBay. One victim was just 18 years old when in February she overdosed on a powerful synthetic opioid which she had bought on AlphaBay.”
AlphaBay’s servers were seized with the help of authorities in Thailand, Lithuania, Canada, Britain and France. The operation included the arrest of suspected AlphaBay founder Alexandre Cazes on 5 July, a Canadian citizen detained on behalf of the US in Thailand.

Cazes, apparently took his life a week later while in Thai custody, the justice department said. He faced charges relating to narcotics distribution, identity theft, money laundering and related crimes.
“This is likely one of the most important criminal investigations of the year taking down the largest dark net marketplace in history,” said Sessions. “The dark net is not a place to hide. We will find you.”

The Dutch National Police took control of Hansa on 20 June, seizing servers in Lithuania, the Netherlands and Germany. The action permitted surveillance of criminal activities on the marketplace before it was shut down in July. Law enforcement officials in Europe and America coordinated their investigations to purposefully leave the Dutch dark web market Hansa up, even after they shut AlphaBay down, Rob Wainwright, the executive director of Europol, said.  He said that European authorities took “covert control” of Hansa a month ago with permission of Dutch judicial authorities before AlphaBay was shut down. The goal of this “team play” was to watch as AlphaBay migrated to Hansa, monitor their new transactions there and “sweep up all those new users.”

Wainwright said the ploy worked: “They flocked to Hansa in their droves. We reported eight times increase in the number of new users on Hansa immediately following the takedown of AlphaBay.”   “The usernames and passwords of thousands of buyers and sellers of illicit commodities have been identified and are subject to more follow-up investigation by Europol and our partner agencies,” he said.
The Europol director said that the “coordinated takedown” was “really special,” and said the coordinated investigation was “one of the most sophisticated law enforcement operations against cybercrime that we’ve ever seen.” Sessions called the case a victory against criminals who use “perverted technology” to send “so many Americans to an early grave.”
“Our critics will say, as we shutter one site another site emerges,” McCabe said. “And they may be right. But that is the nature of criminal work. It never goes away. You have to constantly go at it.”