Cyber Security:  Investors Pour Billions of Dollars in to this Market 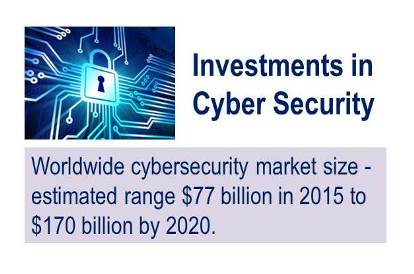 The worldwide cyber security market as defined by market size – estimates range from $77 billion in 2015 to $170 billion by 2020.  Perhaps it is time for business information companies to get involved in this business.  There should be ample opportunities to partner or by acquiring talent.

Allegis Capital, a leading seed and early stage venture capital investor in companies building disruptive and innovative cybersecurity solutions for the global digital economy, has raised a $100 million fund to back cybersecurity startups. “There is a substantial need for new and promising cyber security startups and a huge investment opportunity in them,” said Allegis Founder and Managing Director Robert Ackerman.

CrowdStrike, provider of the first true Software-as-a Service (SaaS) based next-generation endpoint protection platform, completes a $100 million Series C financing round, led by Google Capital. Rackspace, a CrowdStrike customer, also participated in the round along with existing investors Accel and Warburg Pincus. This brings the company’s total funding raised to $156 million.
Checkmarx, a global leader in software application security, secures an $84 million investment from New York-based venture capital and private equity firm, Insight Venture Partners. The new round of capital will be primarily used to further accelerate growth through product innovation and global expansion.

Cylance, the first next-generation endpoint protection company to successfully apply artificial intelligence to predictively identify and stop cyber attacks before they ever execute, has closed more than $42 million in Series C funding. Led by DFJ Growth, the round includes investments from KKR, Dell Ventures, Capital One Ventures and TenEleven Ventures.

Venafi, the immune system for the Internet and leading provider of Next Generation Trust Protection, receives $39 million in additional funding. The financing was led by QuestMark Partners and other new investors Intel Capital and Silver Lake Waterman and existing investors. The investment will accelerate development of the Venafi Trust Protection Platform to secure more Global 5000 businesses and governments and support its fast-growing worldwide customer base.

Cyphort, a pioneer of Advanced Threat Defense (ATD) solutions, secures $30 million in Series C funding. Sapphire Ventures led the round and was joined by all existing investors: Trinity Ventures, Foundation Capital and Matrix Partners. The latest round of funding will be used to help with the security company’s rapid growth and expansion into new markets. The new funding brings Cyphort’s total investment to more than $53 million since inception.

Cybereason, a provider of threat detection solutions, closes a $25 million Series B funding round, with defense contractor Lockheed Martin participating as a strategic investor. Led by Spark Capital with existing investor CRV also participating in the round, the startup said the funds would be used to expand its research and development and support sales and marketing efforts.

HackerOne, the vulnerability management and bug bounty platform, secures a Series B financing of $25 million led by New Enterprise Associates (NEA). The round includes participation from existing investors, including Benchmark, as well as numerous angel investors including Salesforce Chairman and CEO Marc Benioff, among others.

HyTrust, the cloud security automation company, raises $25 million in a Series D round, plus $8 million in venture debt and credit facilities from a syndicate of venture capital firms and strategic investors. This brings the total investment in HyTrust to $84.5 million from 11 investors.

Ziften, a leader in continuous endpoint visibility, raises $24 million in funding led by Spring Mountain Capital, with significant participation from Fayez Sarofim, an early investor in Ziften. The equity financing round will accelerate Ziften’s go-to-market strategy and extend its global reach as it delivers on the demands of organizations for a security solution that swiftly discovers, analyzes, and plugs security exposures to harden corporate resiliency.

BitSight Technologies, the standard in Security Ratings, closes a $23 million round of Series B financing. Comcast Ventures joins as a new investor together with current investors Globespan Capital Partners, Menlo Ventures, Commonwealth Capital Ventures, Shaun McConnon and Flybridge Capital Partners, all participating in the round of funding. New funding will be used to extend sales and marketing into Europe and APAC, expand engineering and data science teams to accelerate the company’s new data analytics products, and fund potential acquisitions of key data source partners. BitSight has raised $49 million to date.

RedSeal, a security analytics company, secures $17 million in a Series C round, bringing their total investment to $56.1 million in five rounds from 11 investors.

RedOwl, a leader in insider risk management and security analytics, raises $17 million in Series B funding led by Allegis Capital. The company will use the new funds to continue its expansion, further build out the product development and data science teams, and to begin broadening its go-to-market efforts.

CounterTack, the leader in Big Data Endpoint Detection and Response (EDR), closes a $15 million Series C round of funding, led by TenEleven Ventures, with other new investors in the round including EDBI (the corporate investment arm of the Singapore Economic Development Board), along with the participation of existing investors.

Cryptzone, a provider of dynamic, context-aware network, application and content security solutions, closes a $15 million Series B round of funding. The round was led by Kayne Partners, the growth private equity group of Kayne Anderson Capital Advisors, L.P., an approximately $29-billion alternative investment firm. Additionally, existing investor Medina Capital and a number of its limited partners participated in the round. The funding will accelerate Cryptzone’s go-to-market strategy and fuel its global expansion.

Barkly, an endpoint security startup, closes a $12.5 million Series A financing round, led by New Enterprise Associates (NEA) and including Sigma Prime Ventures. Barkly has now raised a total of $17 million since the company was co-founded in 2013 by Mike Duffy and Jack Danahy, longtime colleagues, information security industry veterans and serial entrepreneurs. The funding will be used to expedite the company’s recruiting, product development, and go-to-market initiatives in the healthcare and financial services industries.

Keybase raises a $10.8 million Series A, led by VC firm Andreessen Horowitz. Keybase started as a PGP key server hobby project, aimed at making key lookups as easy as knowing someone’s username. The company has gotten more ambitious and it has a new goal – to bring public key crypto to everyone in the world, and they are building open source apps that anyone can use.

enSilo, an Israeli cybersecurity startup which has relocated its corporate headquarters to the west coast, raises $10 million in Series A financing. The round was led by Lightspeed Venture Partners and with additional investment from existing backer Carmel Ventures. The new investment will be used to expand the company’s global operations, in particular in the North America market, and to open US offices on the West Coast.

E8 Security, provider of cyber security analytics solutions to help enterprises detect and manage malicious insider threats and targeted cyber attacks, closes $9.8 million in series A funding led by March Capital Partners, with participation from Allegis Capital and The Hive. The funding will be allocated to furthering product development, currently in private beta with several large domestic and international organizations, while also expanding the organization’s engineering and development teams.

WireX, a network forensics company, raises $9.3 million led by Vertex Venture Capital. The financing round also included participation from existing investors Magma Venture Capital, Entrée Capital and a group of serial entrepreneurs Mickey Boodaei, co-founder of Imperva and Trusteer, Rakesh Loonkar, co-founder of Trusteer and Idan Plotnik, founder of Aorato (acquired by Microsoft). Funding will be used to expand the Israeli-based R&D center and establish headquarters in the US.

TrapX Security, a global leader in deception-based cyber security defense, raises $9 million in its Series B round, led by investors Intel Capital and Liberty Israel Venture Fund together with current investors BRM Group and Opus Capital. The investment will be used to accelerate growth across the business, spanning the development of deception technology, the hiring of engineering and marketing talent, and the expansion of global sales initiatives. Headcount is expected to grow by 40 percent globally within the next year to accommodate the increase in customer demand.

Signifyd, the fastest growing provider of fraud protection for e-commerce businesses, raises $7 million in a Series A round of financing led by Allegis Capital with participation from Resolute Ventures, IA Ventures, QED Investors, Lucas Ventures and Tekton Ventures. This brings the company’s total funding to $11.2 million since its founding by two PayPal veterans.
Illusive Networks raises $5 million in Series A funding from cybersecurity think tank Team 8, which is a partner with Innovation Endeavors, the VC firm founded by Google Chairman Eric Schmidt.

SafeBreach, an Israeli cybersecurity company, raises $4 million from Sequoia Capital and serial entrepreneur and angel Shlomo Kramer. The investment is the first for SafeBreach, which plans to use the money from the financing round to expand its development in Israel and its North American business.

Twistlock, an enterprise security suite for virtual containers, raises $2.5 million in funding from YL Ventures.
VS2, a.k.a. Virtual Software Systems, raises $2 million in seed funding to develop a new way to neutralize cyberattacks after a breach. Investors in the round included Bulldog Investors and Sequel Capital Management.

ThreatQuotient, a cyber security software firm, raises $1.5 million in a seed round of funding led by Blu Venture Investors, Center for Innovative Technology, and the Virginia Tech Investor Network (VTIN) which includes angel investor Todd Headley, the former Chief Financial Officer at Sourcefire. This initial funding will be used to expand the company’s go-to-market reach through both direct and channel partner activities and to further enhance ThreatQ, the company’s threat intelligence platform.