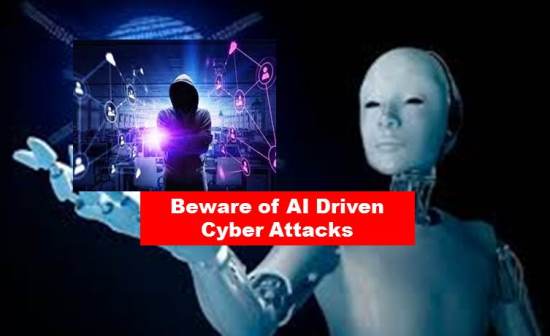 AI has the potential to bring a select set of advanced techniques to the table when it comes to cyber offense, researchers at Darktrace say in a very interesting Report they have recently published – The Next Paradigm Shift – AI-Driven Cyber-Attacks.

In the report, the cybersecurity firm documented three active threats in the wild which have been detected within the past 12 months. Analysis of these attacks, and a little imagination, has led the team to create scenarios using AI which could one day become reality.

AI’s Attack Profile
In the future, AI-driven malware will self-propagate via a series of autonomous decisions, intelligently tailored to the parameters of the infected system.

Imagine a worm-style attack, like WannaCry, which, instead of relying on one form of lateral movement (e.g., the EternalBlue exploit), could under- stand the target environment and choose lateral movement techniques accordingly. If EternalBlue were patched, it could switch to brute-forcing SMB credentials, loading Mimikatz or perhaps install a key-logger to capture credentials.

AI-driven malware will then choose whatever method appears most successful for the target environment and use this to move laterally. Instead of utilising exploits, it might find PsExec is regularly used between certain devices at specific times of day.

By learning this and then using PsExec for lateral movement, during times when it would normally be used, identification of the malware will become almost impossible. PsExec can of course be replaced by RDP, SSH or any other administrative toolkit that represents normal for a given environment.

The malware can learn context by quietly sitting in an infected environment and observing normal business operations, such as the internal devices the infected machine communicates with, the ports and protocols it uses, and the accounts which use it.

Able to make those decisions autonomously, no C2 channel will be required for the attack to propagate and complete its mission. By eliminating the need for C2, the attack will become stealthier and more dangerous. Trickbot has displayed the first signs of utilizing multiple payloads for monetization – stealing banking details and locking machines for ransom. Malware authors can maximize their profits if their malware can choose autonomously which payload will yield the highest profit based on the context of the environment and infected machine.

As Trickbot is modular and under active development, why not add the capacity to make smarter decisions? Narrow AI can learn that if it infects the laptop of a VIP, such a user is likely to conduct a lot of email communication revolving around financial information.

On a VIP’s device, it will be more pro table to silently steal information or lock the machine and thus grind the company to a halt. However, if the malware identifies it has been dropped onto a server that is not processing any mission-critical information, it might just install a crypto-miner, as locking the server will only lead to investigation. Semantic analysis and contextual awareness allow software to make these distinctions and autonomously make these kinds of decisions.

How do we tell where an automated attack stops, and an interactive session starts? As

this case of Trickbot lever- aging Empire Powershell demonstrates, the previously clear distinction between automated malware and human-driven attacks is no longer viable.