Malware, which is a word meaning ‘Malicious Software’ and it refers to any malicious coding that can invade and infect a computer system in many ways. Therefore, there are many different types of malware and the number is increasing.  Some recent analysis by Kroll found that of the 292 cyber-attack cases reported to the UK Information Commissioner in the last year, 53 were malware-related, which is over 18% and the number is increasing.

To reduce your risks, you should increase your computer security, and use more care when opening emails, as there is now an increasing 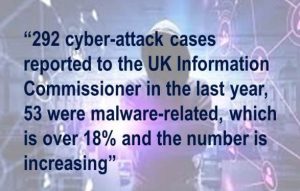 number of Malware types of attack software being employed.

Here we review the top 5 Types:

1. Trojans Horses
Trojan Horses, pretend to be a harmless software program. The name of course comes from Homer who used it to describe the Trojan Horse in the attack and invasion of Troy.
Once activated, Trojans Horses can slow the computer that they invade and then it can delete, copy and change data.
Trojans are often used to steal money from on-line baking accounts.

2. Viruses
Viruses are malicious codes or an entire program attached to files and this affected file can duplicate itself, similar to the way a physical virus duplicates itself inside a living cell.
The virus begins its attack as the file or program is opened and begins working. The virus then duplicates itself and can go on to computers on the same network system with often sever effects.
This includes passwords theft and email spam sent out to friends and business colleagues without the user’s knowledge.

4. Worms
Worms are a particular type of malware virus that can duplicate without the user knowing or having done anything wrong. Worms can then spread through emails and instant messages, without the user knowing. And this often causes the network to malfunction.
Worms are a type of malware that uses weaknesses within network procedures. Worms can be delivered using a USB drive in order to take control of a network.
Worm was first used in this way in John Brunner’s novel The Shockwave Rider in 1975.

5. Ransomware
Ransomware is used by criminal attackers and can be sent via emails, infiltrated apps and websites.
The criminal then demands money, usually crypto-currency, and says once paid they with un-lock the systems and data that they have frozen.

The ransomware attackers send messages threatening to destroy data unless victims pay them money and examples of this type of Ransomware are WannaCry, which started in May 2017 and lasted till March 2018 and this also affected Boeing.
This strain of malware managed to affect the networks of Britain’s NHS, FedEx and Hitachi, among many other organizations. The attack has been attributed to the Lazarus group, who are said to be pirated by the North Korean Government.