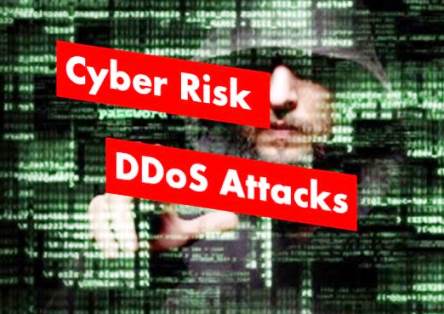 DDoS attacks have become a nightmare for organizations with an active online presence. Here are 14 ways to protect your business.

If your website goes down due to an overload of website traffic, you’re probably a victim of the notorious distributed denial of service (DDoS) attack. DDoS attacks have become a nightmare for companies with an active online presence. From BBC to Twitter and from Donald Trump’s website to Netflix, 2016 saw some of the most unprecedented cyber-attacks in the history of the internet.

From BBC to Twitter and from Donald Trump’s website to Netflix, 2016 saw some of the most unprecedented cyber-attacks in the history of the internet.

In the ever-changing world of high-tech gadgets and rising popularity of Internet of Things, DDoS attacks have increased 2.5 times over the last 3 years, and are believed to become increasingly frequent in the coming years.

Furthermore, according to a report by Cisco in 2016, the average size of DDoS is accelerating and approaching 1Gbps, which is enough to bring large business offline. Globally, the DDoS attacks grew by 25% in 2015 and are likely to increase by 260% by 2020.

From monetary to brand value, DDoS attacks drastically affect every part of the business. The cost a business can incur from a DDoS attack range up to $20,000 and for airline Virgin Blue lost $20 million in an IT outage that lasted for 11 days in 2010.

Today, businesses need to tighten their seat belts to work and land safely in the highly advanced internet world. Here are 14 unique ways to protect you from DDoS attacks.

Focus on creating a system that absorbs a potential DDoS attack. Though creating an action plan in advance is not 100% foolproof way of DDoS protection, it does help in mitigating the risk to a great extent.

An action plan might consist of the following items:

An action plan comes in handy when your website is under attack because it would reduce the extent of damage caused by the hackers.

In fact, an ideal time for any hacker to strike is when your website is likely to witness huge amount of traffic such as Thanksgiving or Christmas. They mix with the genuine traffic and overloads the server with unprecedented traffic, which eventually crashes the server.

Therefore, the best way to quickly notice a DDoS attack is to look out for abnormal traffic increase to your website. If you expect 500 visitors per 10 minutes, an influx of 4000 visitors per minute should trigger an alert.

Staying alert, monitoring the traffic and setting threshold limits when traffic goes beyond a certain level will help you in DDoS protection.

Paying special attention of the connected devices will help you wade through the DDoS attack. For stronger DDoS protection, change the passwords of the devices regularly, switch off the devices when not in use and verify every device before connecting it.

Until the procession begins, focus on mitigating the threats to protect the connected device and your server.

If you overprovision the bandwidth by 200 percent or 600 percent, it will not stop the DDoS attack, but it will buy you crucial time before your resources are overwhelmed.

Therefore, when determining the requirement of bandwidth give your business a healthy margin of error to mitigate the risk of cyberattacks.

Explain to the customers the necessity and dire need of safeguarding their systems because hackers target computers with weak passwords.

Gone are those days when birthdate or family name was considered as a strong password for a computer. Urge your customers to keep difficult passwords to protect their privacy. Furthermore, educate the clients to skip any attachments received from email addresses they don’t recognize.

Today, customer education is an essential component of any company’s strategy for DDoS protection. To proactively guard the customers against such cyber bullies, encourage them to review and follow best practices to secure their device.

With a secured VPS, your website has its own portioned space, unique IP address and operating system, thereby isolating the site from cyberattacks. Furthermore, secured VPS hosting provides full access to console, which helps in eliminating the potential malware.

In short, DDoS secured VPS hosting takes away the headache and makes use of the latest technology to put your website in the driving seat.

Again, with the increasing size of online attack, this strategy will only buy time and delay the ramping up of the threat.

Our DDoS protected dedicated servers provide DDoS protection of 20 Gbps with a bandwidth of 10 terabytes. We manage 100% of the server operation, giving you room to focus on other important business aspects.

These words hold true, especially for IP address spoofing. For those of you who are new to the word ‘spoofing’ – in simple English, it means ‘presenting the wrong facts in a decorated manner’. Prevention of IP address forgery leads to harmful DDoS attack and you need to focus on the following tips to stop IP address spoofing.

This is often neglected by many businesses, mainly because of the frequency of updates and they consider it irrelevant to update the application.

In a usually three-way handshake:

Detection of such half-open connections is done by: