De-Risking SMEs: Why Banks Are Ditching FinTech SMEs — Without Warning 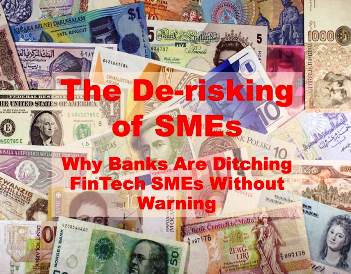 Post-financial crisis regulations have forced banks to become more diligent and aggressive against financial fraud, including money laundering. In response to new rules, financial institutions in the U.K. have heightened their practice of de-risking — that is, withdrawing bank accounts or other financial services from customers deemed to be high-risk.

Financial institutions assure authorities that their increase of de-risking practices is a direct result of new regulations, as well as a residual effect of the cost of compliance.  But a new report from the U.K.’s Financial Conduct Authority (FCA) finds evidence to suggest that some financial institutions are pulling their financial services out from clients at potentially unfair levels.  In particular, analysts commissioned by the FCA at John Howell & Co. found small and medium-sized enterprises and financial services firms are among those disproportionately impacted by banks’ de-risking practices. While the FCA declared that there is “no doubt that banks are trying to do what they believe is expected of them” when it comes to taking a risk-based approach to anti-money laundering rules and reducing the threat of their financial services being used for financial crime, there can be unintended consequences in doing so.  In the last two to three years, the analysts suggest that de-risking has accelerated. Just two large banks in the U.K. alone are closing about 600 business and corporate accounts a month due to de-risking, said researchers.

SMEs are at greater risk of having their accounts closed than their larger corporate peers in the same industry, as are corporations that engage in cross-border dealings, thanks to a lack of transparency among interbank transactions, the report added.  FinTech startups, due to their “poorly understood business models,” are also facing greater threats of de-risking. The E-Money Association (EMA), a representative of the FinTech industry for major conglomerates like Google, as well as startups, recently appealed to regulators to highlight the increasing challenges its 44 members are facing to access bank services.

While the EMA said it understands the need for de-risking, the group claimed notices of closed accounts generally come without explanation and without proposed remedies by the bank. The FCA found that, only in “some circumstances,” are FIs able to discuss with their clients the threat of de-risking and losing their account and to provide assistance to remedy the situation and facilitate access to financial services from another service provider.

Of particular concern to regulators is the lack of a consistent approach to safeguarding against financial crime, the report said. Banks each have their own way of assessing risk factors for each of their customers, and the multitude of those factors makes this assessment even more difficult.  “Banks vary in their ability to ‘score’ particular customers, depending on the bank’s size, resources, geographic coverage and other factors,” the FCA stated.  This inconsistency may lead to an imbalance in how banks and their clients are affected by de-risking efforts.

Researchers found that a majority of smaller banks have reported challenges as a result of larger FIs cutting their interbank ties in an effort to reduce exposure to this kind of risk. As a result, analysts found, these smaller banks have been forced to cut services for their customers and other banks.  Rating a customer’s risk level may be disproportionately more aggressive for new banking clients, too, said the FCA, while large banks’ decisions to not work with a particular type of client may force smaller banks to follow suite so as to not jeopardize their interbank relationships.

Regardless of strategy, the FCA found that the majority of financial institutions surveyed could not clearly state their costs of AML risk monitoring, the report stated. This can also be attributed to a lack of linearity in the de-risking process; compliance spreads across teams within a bank, obscuring a view of costs across the board.

It is often critical for banks to exit a relationship with a client as quickly and smoothly as possible should financial crime be involved. But, the regulator concluded, banks and their clients have vastly different views of what constitutes fair treatment when an account is closed.

“We have found enormous frustration at the actions of banks, even amongst those customers fully supportive of the risk-based approach to financial crime,” the FCA concluded, adding that much of this frustration stems from a lack of communication between banks and their customers.

“There appears to be no ‘silver bullet’ for the de-risking issue,” the report said. But dissatisfaction of clients, like FinTech startups and SMEs operating in industries considered high-risk, is likely to persist if banks do not streamline their risk assessment procedures and if clients, banks and regulatory supervisors do not land on the same page as to what it means for risk assessment practices to be reasonable and effective.