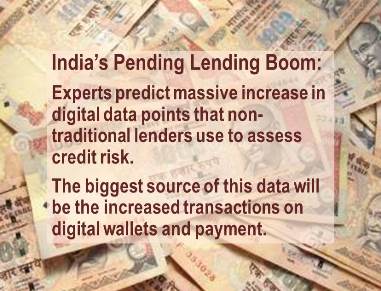 The rapid embrace of digital payments following the crackdown on cash transactions is set to greatly benefit an allied industry: alternative lending startups.

Digital payment companies such as Paytm have emerged the immediate winners post the government’s decision to scrap high-value banknotes and push for cashless transactions. Alternative lending non-banking financial companies, or NBFCs, are seeing a slowdown in borrowings, but industry executives and experts say this is only temporary and the segment will see a boom next year. This, they said, will be because of the massive increase in digital data points that these non-traditional lenders use to assess credit risk. The biggest source of this data will be the increased transactions on digital wallets and payment.

“Digital footprints are increasing since customers are making even ‘kirana’ store purchases through digital wallets or credit and debit cards,” said Abhishek Agarwal, founder of creditscoring startup CreditVidya. “This gives rich data points and it will help alternative lending players give customised small-ticket loans to individuals or businesses instead of generic ones. This will bring down the risks.” CreditVidya is seeing increased interest from banks and NBFCs keen on tapping these data points.

“The biggest near-term beneficiary is payments but I think in the next 12-18 months there will be a significant jump in digital lending,” said Bala Srinivasa, partner at venture capital firm Kalaari Capital.

“The familiarity of one use case such as (online) payments makes it an on-ramp for a lot of other financial services over the phone as the customer just gets more comfortable with the new medium. For banks and service providers this is the sweet spot that can help lower the cost of customer acquisition, the cost of transaction, and with data, the risk of the transaction,” Srinivasa said.

In the near-term, alternative lenders will likely benefit also from the cash crunch that has resulted from the recall of about 86% of the currency in circulation, which is suffocating business for informal money lenders.

“We expect to see a strong increase in demand from (small and medium enterprises) for short-term credit due to the cash crunch as well as the impact on informal lending,” said Shashank Rishyasringa, cofounder of NBFC Capital Float, which is seeing an increase in demand from the segment. Overall, though, the immediate impact of the currency ban on these startups has been harsh.

At Mumbai-based lending startup LoanTap, the number of queries for personal loans dropped from 200 a day to close to nil in the first two weeks post the November 8 demonetisation announcement, said executive director Satyam Kumar. “The fact that people are finding it difficult to withdraw money is one of the reasons for this slowdown in seeking loans,” he said. Manavjeet Singh, CEO of lending products marketplace Rubique, said NBFCs are assessing the impact of the policy and not disbursing loans as aggressively as earlier.

“But they are only postponing the disbursals,” Singh said, “and the last financial quarter, which usually sees nearly half the lending transactions, will see a heavy flow.”