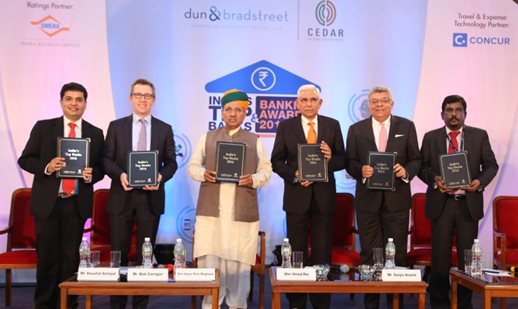 Dun & Bradstreet, the world’s leading provider of global business information, knowledge and insight, in association with Cedar Management Consulting released the 10th edition of its premium publication ‘India’s Top Banks 2016’ at an event in Mumbai. ‘India’s Top Banks’ is among the most reputed publication in the country that profiles banks on the basis of parameters such as total income, total business, net profit and total assets.The publication evaluates the performance of the featured 74 scheduled commercial banks (SCBs), comprising 27 Public Sector Banks (PSBs), 21 Private Sector Banks and 26 Foreign Banks. The publication also provides a brief section on insights on the featured banks derived from the in-depth analysis from the recent developments and trends in the sector. The event also witnessed leading banks being acknowledged and honoured for their distinguished performances across the Indian Banking Sector through Banking Awards 2016.

Speaking on the occasion, Mr. Bob Carrigan, Chief Executive Officer and Director,Dun & Bradstreet said, “The tremendous progress made by the Indian banking sector during the past decade deserves a great deal of credit. The 20% CAGR growth in bank credit and the 4-fold increase in per capita bank credit over the last decade is a clear indicator of the country’s economic progress. While the Regulators and the Government have played a major role in this incredible growth, this has also been possible because of the untiring efforts of Indian banks. With transformation taking place in many areas, banking industry will continue to be a key driving force of the Indian economy and the most dominant segment of the financial sector.” Highlighting the key insights from the publication, Mr. Kaushal Sampat, President & MD – India, Dun & Bradstreet said, “This is an exciting time for the banking industry, yet it comes with its own share of troubles. The NPA quagmire, burden of high provisioning and slowdown in credit demand have undoubtedly taken a toll of banks’ performance over the last two years. However, the concerted policy measures by the Government and the RBI will see the beginnings of a structural recovery in the banking system. Moreover, with the banking industry embracing the ‘digital disruption’ wholeheartedly, innovative products will continue to be rolled out rapidly in the future to meet customer expectations as well as to tap the largely underpenetrated rural and semi-urban population”.

“Business Confidence has received a strong boost driven by the focus of the Government on policy certainty, predictability and continuity. The clearance of Bankruptcy Code and Debt Recovery Bill reflects the Government’s firm intent on improving the ease of doing business in India and creating an enabling environment for expeditious resolution of bankruptcies while simultaneously reducing the problem of stressed assets in the banking system. Going forward, the above-normal monsoon along with expected pick-up in rural demandcould raise capacity utilization, kick start the investment cycle and accelerate bank credit growth” he added.

Some of the key findings from our study include:

Credit growth of the featured scheduled commercial banks (SCBs) moderated to 6% in FY16 from approximately 9.7% in FY15. This actually is the lowest growth in two decades. The slow growth of bank credit can largely be attributed to banks adopting a cautious approach on account of rising NPAs and weak investment demand from the corporate sector.

Bank deposit growth significantly decelerated from approximately 5%in FY15 to 7.5% in FY16, the lowest in the past five decades. The total business of the featured banks registered a growth of 5% to nearly Rs 180 trillion in FY16 compared to aroundRs 167 trillion in FY15

The Gross NPA ratio went up sharply from 3% in FY15 to 7.5% in FY16, highest in 13 years, largely reflecting reclassification of restructured standard advances as NPAs.  Higher provisioning for NPAs adversely impacted the aggregate net profit which declined by around 61% in FY16.