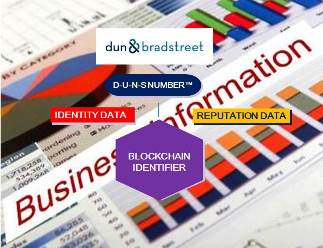 Using a blockchain ledger to vet trading partners and others in the ‘financial supply chain’ would make transactions more secure and faster, Dun & Bradstreet said in an interview with the Wall Street Journal.

A version of this “financial supply chain” running on a blockchain ledger would allow trading partners to confirm their identities and the terms of contracts through secure, immutable digital records stored on Dun & Bradstreet’s blockchain, Mr. Khan said. Large banks, including J.P. Morgan Chase & Co., are testing their own blockchain systems for conducting financial transactions, he noted. “We want to make sure our content is available in this way,” he said.

Dun & Bradstreet provides financial and other corporate data about public and private companies, storing 250 million business records in its databases, with information culled from 30,000 sources, he said.

A pilot system with a subset of data about 6,500 public companies is accessible now to customers, he said. The blockchain system matches D-U-N-S numbers – the proprietary code Dun & Bradstreet assigns companies it covers – to unique blockchain identifier code created for each company. In a trade finance deal, for example, a company could, he said, verify “instantaneously” information about a potential partner, including legal name, address and whether there are liens, lawsuits or judgments against it.

A possible future use of the system could include advisory services where Dun & Bradstreet suggests compatible trading partners for a customer based on analyzing data culled from the blockchain ledger about how the organizations do business, he said. Dun & Bradstreet would charge a fee for such “propensity modeling,” he said.

Mr. Khan declined to give a timeframe for a formal launch of the system, saying that financial services companies will continue to test it in the coming months. Bank of America Corp., UBS Group AG, Nasdaq Inc., and dozens of other large financial firms are conducting tests of blockchain technologies, to find ways to conduct transactions faster and more securely.