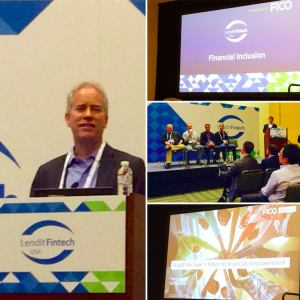 Some of the top thought leaders in banking, finance, artificial intelligence, machine learning, and credit risk came together in San Francisco to discuss the key trends and innovations in our industry.  The FICO team was excited to lead the Financial Inclusion track that focused on how to responsibly expand credit access to previously unscorable consumers.  In addition, we explored the power of tapping into alternative data in credit scoring in markets across the globe.

A key point that the experts underscored during the Financial Inclusion sessions at LendIt was that expanding financial inclusion is a win-win proposition.  Consumers benefit through more affordable borrowing options, while lenders benefit by growing their customer base.  At a macroeconomic level, broader financial inclusion can benefit entire countries through the economic growth that greater access to credit can help achieve.  With an estimated 2 billion unbanked consumers globally and another 1.3 billion with access to a bank but without a credit file, the challenge is sizeable.

It’s also a challenge that FICO is in a unique position to address and at scale.

A key driver of successful financial inclusion is the ability for lenders to effectively gauge the risk of an underserved consumer.  In many cases, consumers that currently lack access to credit can be credit risks.  The challenge is identifying those with the financial wherewithal to pay their debts, but who lack experience with banks and therefore have not yet had the chance to demonstrate good credit behavior.  Financial inclusion is accelerated when lenders can adequately measure the default risk of those seeking credit for the first time, or those who have gone an extended period of time not using credit.  FICO has explored, and continues to investigate, a variety of different data sources and analytic techniques that help lenders approve credit for those that would typically be denied by mainstream banks due to a lack of credit history.

While challenges of achieving financial inclusion exist globally, they can take a different form in a developed country such as the U.S. FICO estimates that a FICO® Score based on traditional credit file data can be generated for roughly 91% of consumers that are actively applying for credit in the U.S.  This is a reflection of a strong banking system and a mature credit reporting system.  But this still leaves millions of consumers seeking an on-ramp to mainstream banking hindered by a lack of demonstrated credit history, and by extension, a traditional credit score.

One option to expanding the scorable population is to reduce the minimum scoring criteria required by the FICO® Score.  However, our analysis shows that if we would attempt do so, several issues would start to emerge.  With respect to credit files that are too stale (i.e. have not been updated in 6 months and in many cases for several years) to score we see that many have voluntarily stopped using credit.  Scoring these millions of “credit retired” consumers, whose average age is about 70, might increase scorable rates but very few are actually seeking credit.  Focusing on this population doesn’t really address the financial inclusion issue and can distort the promise of extending credit to those seeking it.  The other significant segment identified amongst consumers with stale credit files are those that have previously run into financial distress and lost credit access.  We see that these consumers have files frozen in time and by definition have poor credit histories. Focusing on these consumers’ stale traditional credit files alone won’t help them find a path back to financial inclusion.

The better option to reliably score more consumers is to leverage data sources not found in a traditional credit file at the credit bureaus.

To this end, FICO undertook research to meaningfully extend our ability to score more consumers that are seeking financial inclusion.  With FICO® Score XD in the U.S., we found that leveraging the Fair Credit Reporting Act (FCRA) compliant “alternative data”– data that resides outside of traditional credit files– could effectively address a large segment of the unscorable population, producing a reliable and accurate credit assessment for lenders to use in underwriting this credit underserved population.  This includes not just those with stale files but those with sparse or no traditional credit histories as well.  Examples of those with sparse or no credit histories include young adults just beginning their credit journey, as well as immigrants striving for the American Dream.  Teaming with Equifax and LexisNexis, we launched FICO® Score XD which considers alternative data such bill payment data (from a database of telecommunication, cable and other payments), and select public records data, in addition to whatever traditional credit file data exists, in order to provide a robust assessment of credit risk on many  previously unscored consumers.

Through continued innovation we have been able to refine our use of these alternative data sources and score even more previously unscored consumers.  With the release of the second version of FICO® Score XD we are now able to score over 26.5 million consumers that were previously unscorable. It’s a significant step toward broader financial inclusion in the U.S. and includes learnings that we intend to utilize across the globe via