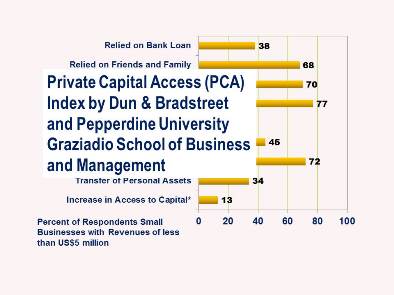 The ability of small businesses to access needed capital has steadily risen in the past four years, according to the second quarter results from the Private Capital Access (PCA) Index by Dun & Bradstreet and Pepperdine University Graziadio School of Business and Management.  Despite this, the survey found that small businesses’ access to traditional bank loans, while increasing, still lags behind that of middle market companies, forcing small businesses to rely on personal assets and personal credit. “When we began the study four years ago, small businesses were reeling from the effects of the Great Recession,” said Jeff Stibel, vice chairman of Dun & Bradstreet. “Since then, we have seen steady progress for small businesses being able to acquire the capital they need, although the financing is still predominantly not coming through traditional lenders. It will be interesting to see how the new option of crowdfunding will affect small businesses, as our study has shown more eagerness to use that option as compared to their mid-sized counterparts.”

“Business borrowing habits suggest owners may not see a need for an immediate infusion of capital,” said Dr. Craig R. Everett, assistant professor of finance and director of thePepperdine Private Capital Markets Project. “However, these findings suggest business owners are still feeling the lasting impact of the recent recession and remain skittish about the future, as reflected in an abundance of caution when it comes to the economic environment.”

The PCA Index is a quarterly indicator produced by the Graziadio School of Business and Management at Pepperdine University with the support of Dun & Bradstreet. The Q2 2016 survey is based on 1,097 completed responses collected in April 2016.