Fintech – The Next Frontier for Hong Kong’s Battle with Singapore? 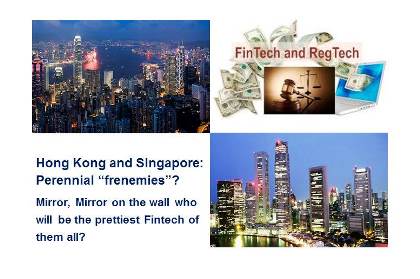 Perennial “frenemies” Singapore and Hong Kong have never shied away from an opportunity to slug it out – whether in the race to outdo each other as Asian hubs in finance, aviation or even street food.  Total Asia-Pacific investment in fintech, a catch-all term used to refer to newly emerging digital technologies that make financial services more efficient, has risen from US$103 million in 2010 to US$4.3 billion in 2015, according to global consultancy firm Accenture.  The 2015 amount accounts for 19.3 per cent of global investment in the sector, second only to North America.

Now with London – until recently the world’s undisputed fintech, or financial technology, capital – in a quagmire following the Brexit vote, that sector could well become the new frontier for the two Asian cities to do battle not only for regional domination, but global supremacy.

Enthusiasm for fintech among Asian consumers, investors and merchants is among the highest in the world.  The uptake of innovation such as Blockchain – the mechanism behind cryptocurrency Bitcoin – as well as cutting-edge mobile payment, peer-to-peer money-transfer and stock trading apps rival the interest in blockbuster digital services like Netflix, Uber and Airbnb, company executives, officials and technology experts told This Week in Asia.

It may not be a pipe dream for Hong Kong or Singapore to usurp London’s throne as it reels over question marks on whether investment will still flow into Britain when it is forced to leave the European single market in a ‘hard Brexit’.

Asia fintech deals near US$10b amid mega funding in China

“Both Hong Kong and Singapore have tremendous opportunity, due to the surging growth of fintech and thanks to the Brexit uncertainty,” said David Shrier, managing director of the Massachusetts Institute of Technology’s Connection Science initiative.

Western-based fintech firms have signalled they are expediting Asian expansion plans to tap the widespread interest.  Ayondo, a Europe-based fintech firm, is in advanced stages of completing a reverse takeover bid on Catalist, the Singapore bourse’s secondary board.  The firm’s “social trading platform” allows users to delve into social media-style stock trading. They can emulate the trades of other users, exchange ideas and gauge market sentiment.

“Being in Asia and being in Singapore just makes a lot of sense. The authorities are extremely supportive and it’s the region where economic growth rate is the highest and wealth generation is the highest,” Robert Lempka, Ayondo’s chief executive, said.

Transferwise, a fast-rising Britain-based money-transfer startup, plans to launch in Singapore and Hong Kong after starting its Japan business in early September. Jo White, the company’s spokeswoman, said cities aspiring to be the next fintech hub will have to enact regulations that “both protects the consumer and encourages innovation”.  White said a ‘hard’ Brexit – which would entail British financial firms losing their current ability to sell services across the European Union – could mean “London may not hold its own, especially with other capitals innovating in order to compete”.

Industry players say Singapore has a head start over Hong Kong in the fintech race. The city-state’s central bank, the Monetary Authority of Singapore (MAS), has moved aggressively over the last year to draw in fintech start-ups from around the world.

Hong Kong risks being left behind in the fintech revolution

Last year, it launched a Fintech and Innovation Group, putting at its helm former top Citigroup banker Sopnendu Mohanty.  The MAS has also indicated it will not apply the same level of regulation on start-up fintech firms as it does for conventional financial institutions until they grow larger.  It has pledged to spend Sg$225 million (HK$1,283 million) in the fintech sector over a period of five years.

David Rosa, the founder of Hong Kong-based digital payment app Neat, said Singapore financial regulators were faring better in promoting fintech than their east Asian counterparts because they were “a more polished administration in terms of doing public relations and pitching their policies”.

A report by consultancy firm EY in February placed Hong Kong’s fintech eco-system last among seven key hubs around the world. Singapore was fourth, behind Britain, New York and California. Hong Kong financial authorities, signalling recognition that they are lagging behind, have stepped up efforts to promote the fintech space.

On September 6, the Hong Kong Monetary Authority launched a regulatory regime known as a “sandbox”, which will allow fintech pilot projects by banks in the territory to operate without adhering to traditional supervisory requirements.

The Financial Services and the Treasury Bureau said the government’s approach to fintech was to balance a “technology neutrality” principle with the need to protect investors. “We will help ensure that an appropriate balance is struck between market innovation and investors’ understanding and tolerance of risk,” the bureau said.

The bureau said fintech firms that based themselves in the territory could “enjoy Hong Kong’s unique advantage into the mainland” through the CEPA free-trade agreement as well as other “market opening measures”. It added: “The clustering of local, mainland and overseas fintech talents and startups in Hong Kong will make our fintech sector even more vibrant and its growth sustainable”.

Fintech seen as a force that will push regulators together

Shrier, the US-based fintech expert, said Hong Kong could do more to capitalise on its mainland links, and mooted the idea of a innovation cluster with Shenzhen. “I recognise that there are many complexities, but creation of such a super regional fintech centre would likely lead to defining competitive advantage,” said Shrier.