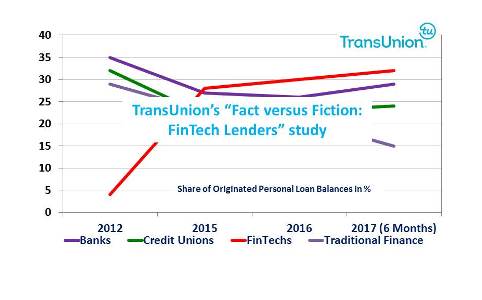 To better understand the personal loan market, TransUnion studied unsecured personal loan originations over the past several years, as well as more detailed portfolio performance between 2014 and 2016. The analysis differentiated between those loans issued by banks, credit unions, FinTechs and traditional finance companies to compare performance across lender types.

The study found that the balance share of these loans originated by FinTechs had dramatically risen in recent years. At the end of 2016, FinTechs represented 30% of all personal loan balances, up from about 4% in 2012 and less than 1% in 2010. This trend continued through the first six months of 2017, with FinTechs now representing 32% of personal loan balances. As part of this study, TransUnion developed a coarse risk-return metric*. While loans provided by FinTechs experienced higher delinquencies than competitors, specifically within the lower credit risk tiers, TransUnion’s study found that they generated effective portfolio risk-return ratios that exceeded those of banks and credit unions. As of Q2 2017, FinTechs averaged an 8.7% return compared to 6.7% for banks and 6.3% for credit unions. Traditional finance companies average the highest return at 11.5%.

“The FinTech business model appears to be working nicely. Their use of the latest technologies combined with cutting edge alternative and trended data has likely helped them become leaders in the personal loan industry,” said John Wirth, vice president of FinTech strategy and market development at TransUnion.

The study demonstrated how FinTechs focus their originations in the near prime and prime risk tiers. As of Q4 2016, 59% of FinTech balances originated were in those two risk tiers. This is slightly higher than the 57% rate in Q1 2014. “Counter to general assumptions about FinTechs, only around 10% of originated FinTech loan balances are subprime, compared to 14% for the overall market for personal loans,” added Wirth.

While conventional wisdom holds that personal loan borrowers fall in the subprime risk bucket, TransUnion data through Q2 2017 show that personal loan adoption is greatest in the near prime (26%) and prime and above (49%) risk levels. Subprime constituted only 25% of such loans.

*To develop the risk-return metric, the first step was to estimate APRs and calculate interest income over the first year on books for any given cohort of personal loans. Next, loan balances that were delinquent 60 or more days past due were subtracted from this interest income measure as a conservative estimate of losses. The net difference was then divided by the total original balance of the cohort to arrive at a risk-return measure. For example, a $100M portfolio generating $15M in interest income and having $5M in 60+ DPD balances in the first year would yield a risk-return measure of 10%. This is a coarse measure of risk versus return, in that costs associated with funding, branches, operating expenses, collections, and technology are not accounted for—but it is a good starting point for comparison of performance across lender types.