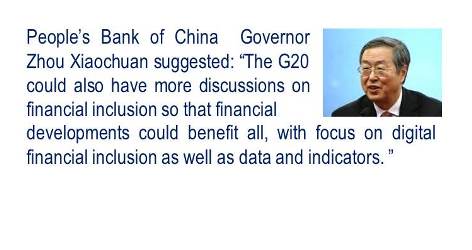 The first G20 Finance Ministers and Central Bank Governors Meeting under the Chinese Presidency was held in Shanghai on February 26-27, 2016. The Chinese Premier Li Keqiang spoke in a video message to the meeting. The meeting was co-chaired by Mr. Zhou Xiaochuan, Governor of the People’s Bank of China and Mr. Lou Jiwei, Finance Minister of China. Ministers and Governors discussed issues concerning global economy, framework for strong, sustainable and balanced growth, investment and infrastructure, international financial architecture, financial sector reform, international tax, anti-terrorist financing, green finance and climate finance. A communiqué was released after the meeting.

At the meeting, Ministers and Governors agreed that the global recovery continues, but it remains uneven. Downside risks and vulnerabilities have risen. While recognizing these challenges, Ministers and Governors judged that the magnitude of recent market volatility has not reflected the underlying fundamentals of the global economy. They stressed the importance of using all policy tools – monetary, fiscal and structural – individually and collectively to respond to risks, boost confidence and strengthen economic growth. Ministers and Governors agreed to use fiscal policy flexibly while ensuring debt as a share of GDP is on a sustainable path and agreed that monetary policies will continue to support economic activity and ensure price stability. Ministers and Governors reaffirmed that they will refrain from competitive devaluations, resist all forms of protectionism, consult closely on exchange markets, and continue to explore policy options that the G20 countries may undertake as necessary to support growth and stability. They agreed to further enhance the structural reform agenda, including by developing a set of priorities and guiding principles, as well as by creating an indicator system to further improve assessing and monitoring of the progress of structural reforms. Ministers and Governors agreed to explore potential policy measures to address the recent weakness of trade and investment.

Ministers and Governors reaffirmed their commitment to advancing infrastructure investment, encouraged Multilateral Development Banks (MDBs) to formulate quantitative ambition for high-quality projects and enhance cooperation among existing and new MDBs, and decided to launch a global infrastructure connectivity alliance initiative. Ministers and Governors welcomed the entry-into-effect of the 2010 International Monetary Fund (IMF) Quota and Governance reforms, supported the timetable for completing the IMF’s 15th General Review of Quotas by the 2017 Annual Meetings and the World Bank Group (WBG) to implement its shareholding review according to the agreed roadmap and timeframe, with the objective of achieving equitable voting power over time. Ministers and Governors committed to better monitoring capital flows, including more timely identification of risks to address challenges arising from large and volatile capital flows, and stressed the importance of an adequate and effective global financial safety net (GFSN). Ministers and Governors supported further work to examine the possible broader use of the Special Drawing Rights (SDR).They remained committed to timely, full and consistent implementation of the agreed financial reforms, and advancing the formulation of other standards as planned. Ministers and Governors reiterated that they will continue to closely monitor and address emerging risks and vulnerabilities in the financial system, take stock of experiences and potential lessons with macro-prudential frameworks and tools, and continue to strengthen the regulation and oversight of financial market infrastructures. Ministers and Governors remained committed to strengthening the financial inclusion agenda, and endorsed the inclusive framework proposed by the OECD for the global implementation of Base Erosion and Profit Shifting (BEPS) project. China would make its own contribution by establishing an international tax policy research center for international tax policy design and research as well as technical assistance to developing economies. Ministers and Governors were resolved to combat decisively terrorist financing and enhance cooperation and exchange of information. They agreed to identify institutional and market barriers to green finance, and based on country experiences, develop options on how to enhance the ability of the financial system to mobilize private capital for green investment. Ministers and Governors called for timely implementation of the Paris Agreement on Climate Change, and reaffirmed their commitment to implementing the 2030 Agenda for Sustainable Development.

According to Minister Lou Jiwei, this meeting is to make necessary preparation in the economic and financial area for the G20 Hangzhou Summit, under the theme of “Toward an Innovative, Invigorated, Interconnected and Inclusive World Economy”. China will work with G20 members to secure more outcomes in the Financial Track at an early stage in order to lay a solid foundation for a successful Hangzhou Summit and contribute to strong, sustainable and balanced growth.

Governor Zhou Xiaochuan noted, the Chinese economy has entered a period of “new normal” with growth shifting from high to mid-to-high speed. Economic fundamentals remain strong. The structure and quality of growth have been improving. Given rising new sources of growth, China still has great potential for future growth and will continue to make significant contributions to global growth. Against the backdrop of weak global economic recovery with rising risks, it is urgent for the G20 to improve and strengthen policy coordination by jointly promoting global economic growth and a robust recovery, consulting on economic and financial matters where necessary, and taking policy actions individually and collectively to maintain financial stability. The G20 should further enhance its agenda on structural reforms, with a view to keeping up the reform momentum and giving firm support to strong, sustainable and balanced growth over the medium to long term.

Governor Zhou Xiaochuan suggested, the G20 should continue to advance financial sector reform. Discussions could focus on ensuring full, consistent and timely implementation of post-crisis reforms, including those reported by the Financial Stability Board and endorsed by the G20 in the past, as well as finalizing the remaining elements of the new regulatory framework according to agreed timelines. The G20 could also discuss experiences and lessons in the implementation of macro-prudential policy frameworks and tools, look into potential risks in market-based finance and policy tools to address them, and strengthen the regulation and oversight of financial market infrastructures. The G20 could also have more discussions on financial inclusion so that financial developments could benefit all, with focus on digital financial inclusion as well as data and indicators.

Governor Zhou Xiaochuan introduced, the Chinese Presidency has facilitated the establishment of the Green Finance Study Group to promote more sustainable and environment-friendly economic growth. The objective of the study group is to identify barriers to green finance, and develop options to enhance the role of the financial system to mobilize private green investment.

Minister Lou Jiwei said that structural reform is a fundamental approach to effectively addressing mid-to long-term global economic challenges. Correcting distortions and improving resource allocation are at the core of the structural reform agenda. The Chinese government is committed to promoting structural reforms. Firstly, streamline administration and loosen restrictions. The central government has streamlined hundreds of administrative approval items. Administrative service centers can be found in every city, accelerating administrative procedures and greatly encouraging innovation and entrepreneurship. Secondly, carry forward price reform such as streamlining the once complicated pricing scheme for industrial and commercial use of natural gas. Thirdly, encourage innovation including supporting corporate innovation through tax policies or investment funds with private sector participation. Fourthly, optimize the structure of fiscal expenditure, reduce inefficient expenditures such as those that are not environmentally friendly, and tackle expenditure fragmentation. Meanwhile, the Chinese government supports efforts of cutting overcapacity and destocking. Fifthly, promote new urbanization that is people-oriented, making subsidies for compulsory education transferrable across different regions, integrating the basic old-age insurance and health insurance systems for rural and urban residents, and providing support for migrant works to find jobs and settle down in cities. These policies have achieved good results in the short-term and promoted growth. We are also pushing forward more challenging reform tasks. In general, our reforms have achieved positive results, continuously optimizing the economic structure. In 2015, consumption contributed 66% to China’s GDP, service sector made up over 55% of the economy while the share of investment decreased significantly. However, investment in technology and equipment increased rapidly. These reform measures have improved resource allocation, helped ensure full employment, raised household income substantially, and supported the 6.9% annual growth. In 2016, China needs to carry out reforms and properly manage aggregate demand to keep mid-to high-speed growth.

Minister Lou Jiwei further stated that infrastructure investment is a significant driver of economic growth, which could raise potential growth rate and promote mid-to long-term economic growth. G20 members need to scale up infrastructure investment. He also emphasized the importance of addressing BEPS and called on the G20 to establish a fair, efficient and inclusive framework for implementation of BEPS-related outcomes.

According to the Work Plan of G20 Finance Track in 2016, the second G20 Finance Ministers and Central Bank Governors Meeting will be held in Washington D.C. on April 14-15.