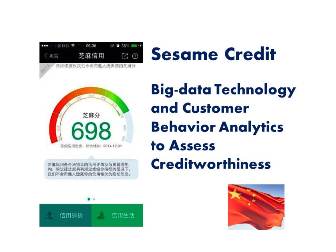 Called Sesame Credit, the new agency leverages big-data technology and customer behavior analytics to assess creditworthiness, which is expected to make it easier for companies to extend credit to millions of Chinese consumers, according to Sesame Credit officials. Credit bureaus and ratings agencies provide lenders, merchants and other companies with reliable means of determining the ability of customers to pay their bills, allowing them offer car loans, mobile-phone service contracts and a host of other types of consumer installment credit.

Sesame Credit officials said their goal is to make consumer loans and other credit services more widely available in China, which has an underdeveloped consumer-finance industry compared with many Western countries. At the start of 2014, 320 million Chinese citizens–less than one quarter of China’s population–had credit records in the People’s Bank of China credit reference center, Zhang Jianhua, head of the PBOC’s Hangzhou branch, recently told Caixin magazine. In the U.S., 85% of consumers have credit ratings.

“Sesame Credit is focused on those who may have little credit history at traditional credit agencies,” said Yu Wujie, Sesame Credit chief data scientist, in a prepared statement. “They may have never obtained bank loans or applied for credit cards.  However, they might be active Internet users who shop online a lot, e-pay their utility bills on time, have a stable residential status and have been using their mobile phone numbers for a long time. We will take these and other factors into consideration when assessing consumers’ creditworthiness.”

To establish credit scores, Sesame Credit is combining traditional information sources for assessing creditworthiness such as public records with vast amounts of online data from Alibaba Group, an affiliate of Ant Financial.

BIIA Comment: Consumer credit information was off limits for the private sector until 2013 when China decided to regulate this sector.   Companies need to be licensed, are required to have a minimum capital of Yuan 50 million, possessed adequate data management systems, plus industry expertise.