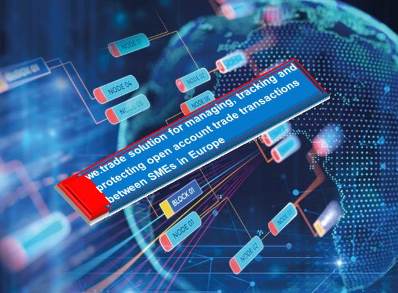 The we.trade blockchain platform is now live across 11 European countries, with four banks closing seven trade transactions.  The pilot transactions, which took place over the last five days, were carried out by 10 companies across five countries. The four banks involved were HSBC, KBC, Nordea and Rabobank.

Powered by Hyperledger Fabric, we.trade is a solution for managing, tracking and protecting open account trade transactions between SMEs in Europe. It connects parties involved in a trade deal in one place, helps SMEs initiate new trading relationships and provides them with easy access to a range of financing solutions.

we.trade has nine founding members, which also include Deutsche Bank, Natixis, Santander, Société Générale and UniCredit. The project’s IT vendor is IBM. In April, the banks took a crucial step toward the commercialisation of we.trade, creating a legal entity to manage and distribute the platform.

In a statement, Roberto Mancone, COO of we.trade, calls the live transactions a “massive achievement”, adding that they prove that the platform is a “robust and commercially viable proposition”.

“This really is collaboration at its finest. Not only has we.trade built a technical solution, it has also managed to create real collaboration across multiple banks and increased the connectivity of the trade ecosystem,” he says.

HSBC played a major role, taking part in four of the seven pilot transactions. While we.trade is primarily aimed at cross-border trade, it can equally be used for domestic transactions. As such, three of HSBC’s pilots was done internally between HSBC branches in the UK and Ireland, while one was executed together with Nordea.

The trade with Nordea involved UK-based company Fluid Pumps, which used the platform to complete an open account sale with GPS Food Group in Finland, supported by a bank payment undertaking.

The other banks in the consortium are currently working to complete their first transactions over the coming few months. The next step will be for the banks to bring a commercial product to the market in the fourth quarter of 2018, which will include onboarding more banks and their customers in Europe. The intention is to expand globally in 2019, with Asia being the next target market.

Other banks can join we.trade by purchasing a licence. This is designed to expand the usership as quickly as possible.

“We have a very extensive list of banks knocking on the door, in various stages,” Raphael Barisaac, global co-head of trade finance at UniCredit, told GTR on the sidelines of the Blockchain Summit in London last week. But, he added, “for now, we have decided to focus on getting the commercial version up and running full steam ahead – thus enabling as many clients possible to use the platform”.

He noted that the customer feedback so far has been “very positive”.

“The customers are very enthusiastic about this solution,” he said. “The clients couldn’t care less whether you use a technology that is 20 years old or 10 years old or blockchain. They care about the value you are adding to their business. At the end of the day, the technology per se doesn’t bring any value as a stand-alone, it is an enabler – the value comes with what you are able to provide to the client as a service. And yes, by using the distributed ledger technology we are providing something extra.”